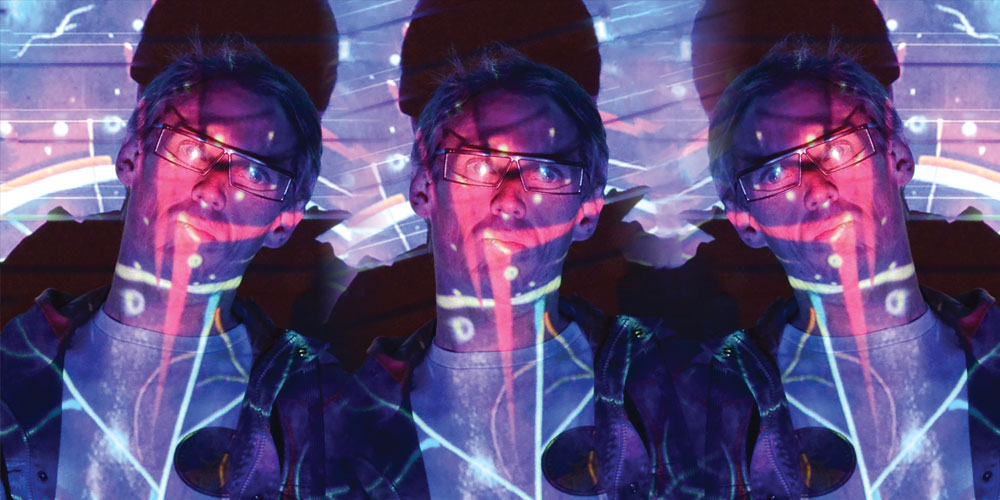 It’s been a defining year for Buddina projection artist Brian Keayes aka Möbius.

For more than 18 years, Mr Keayes has been exhibiting in music and art festivals, nightclubs and art galleries across Australia and Japan. However, 2018 has been a breakout year for the artist, who has exhibited in three major art festivals across the Sunshine Coast as well as Burning Man in the US.

“This year I have found not only my medium of projecting light onto sculpture and natural landscape, but also my messaging, bringing attention to some of humanity’s largest environmental challenges over the next 100 years,” he says.

“Art is a fantastic way to open up dialogue around our most tightly held beliefs and values, as well as sharing information in new ways.”

He has been a regular contributing projection artist at Woodford Folk Festival and has been continually supported by the local councils to exhibit in festivals and art shows over the years, but it was his 2018 work that has really brought momentum and attention to his art form.

He collaborated with Phil Smith as part of Anywhere Theatre’s The Cave earlier this year, producing a massive visual wall of imagery at the University of the Sunshine Coast.

He was showcased as a feature artist for NOOSA alive! bombing Noosa with environmental messaging including submerging shopfronts in water from rising sea levels.

He also exhibited at the Horizon Festival and Swell Sculpture Festival in Currumbin. But it was his visit to Burning Man in the Black Rock Desert of Nevada that was his biggest pinch-me moment.

He projected a seascape videoed at Peregian Beach onto the desert floor, to an audience of 78,000 over seven nights.

“Burning Man is at a scale that’s almost incomprehensible,” he says.

“It’s in a setting that’s almost out of this world, because it’s on the desert salt floor. It’s sierra, high-altitude mountains and fairly desolate. The sunrise and sunset are otherworldly.”

Mr Keayes began his first forays into light projection in Brisbane, when he teamed up with a DJ friend to enhance the music using visuals. He moved to Japan, where he collaborated with DJs from around the world, before returning to Australia and settling on the Sunshine Coast.

He credits his interest in art and creative pursuits to his father, an accountant who became an inventor in his mid-forties. “He opened up my mind to bigger things and bigger thinking,” he says. “I could see the traditional work paradigm has got faults.”

He says he was a “lost student” at school, who didn’t find his feet until Year 10.

“I got into industrial design – woodwork, metalwork, playing with circuitry and designing furniture,” he says. “I topped the year and got an award that year for design. That’s when I realised, hang on, there’s this whole thing out there that I’m good at.”

While his art doesn’t generate his primary income – he runs a creative agency called AE Creative – he says it pays well.

“I certainly get paid more as a mid-weight emerging artist than a painter or a sculptor would. I think that’s because professionally I work in that creative space, but also in a commercial environment.

With Sydney’s Vivid festival becoming more popular each year, light projecting is now being seen as a legitimate art.

“I have some audacious goals around projecting on the Great Wall of China and the Statue of Liberty,” Mr Keayes says.

“On a personal level, it’s about bringing conversation in a new light around the issues that are hard to talk about, or are not perceived to have an answers. That’s truly the purpose for me.”

Continue Reading
You may also like...
Related Topics: Art, artist