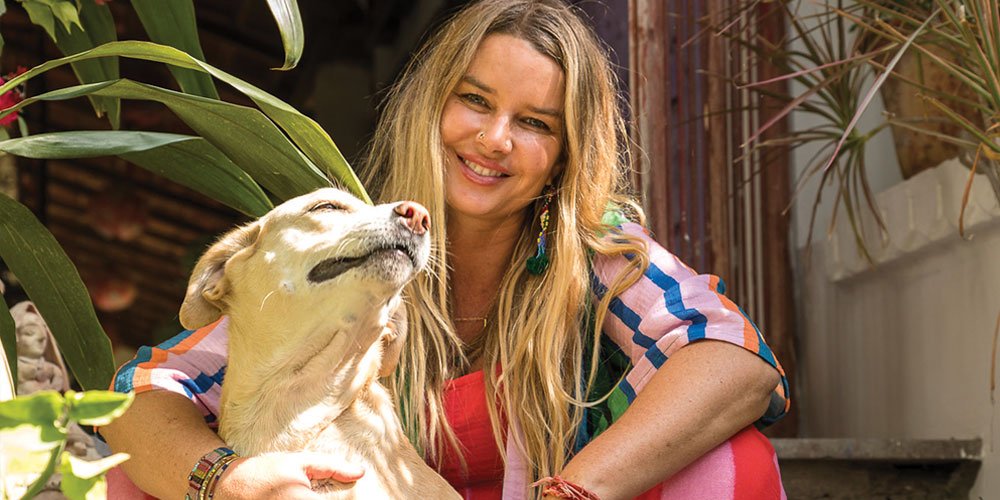 It has been 25 years since Dui Cameron first visited India and promptly fell in love. Little did she know then that she would go on to found a successful clothing label inspired by the colours and fabrics of India, the vibrant Boom Shankar.

Born in Kempsey, she moved to  Peregian in the 1980s and has a home in Peregian, where her parents still live, and in Pushkar in India. Both homes are veritable kaleidoscopes of colour, infused with Ms Cameron’s eclectic style.

In a world of fast fashion and trends that come and go, Boom Shankar has always walked its own path and endured while other labels have fallen by the wayside.  Ms Cameron has a knack for designing fun clothes that make women feel beautiful, but it was never her plan to become a fashion designer.

“I never envisioned any of it,” she says. “When I was younger, all I wanted to do was be a jillaroo. I rode horses and I thought I’d be a farming girl, because I love animals.

“Boom Shankar started with me needing to make money to travel. It kept me moving and being able to live in India.

“My father and his brother are real travellers. My dad was more into Europe and America and his brother was into Pakistan, Afghanistan, India and Asia. I was always blown away with their stories as a child.”

Her first overseas trip was to Thailand when she was 19. She owned a bar in Bangkok and had some “crazy times”. But it was India that stole her heart when she landed in 1994.

“I’ve always wanted to be in India,” she says. “I knew as soon as I landed I’d come somewhere magical that was very soon going to become a home. I absolutely loved the people; I found them incredibly warm.

“For the amount of people there, it’s a pretty spectacular kind of love you get from people that have not got a lot. They give you the shirt off their backs and they feed you  before they feed themselves.”

Ms Cameron spends half the year  in India, visiting factories that make her garments and designing upcoming Boom Shankar ranges – she is working on summer 2022 when we speak. Her stunning home is always filled with Indian friends and her five cats, two dogs, eight Indian star tortoises, two cows and lots of monkeys. She likes  to leave the doors open so they can come and go as they please. Her 16-year-old son Charlie attends Sunshine Beach State High School and also travels between the Coast and India.

“He has flown over from Australia on  his own,” she says.

“He’s very capable. He just comes to our home, catches up with all the people in our village and all the kids ride around on motorbikes. He just goes to people’s houses, eats at different people’s houses.

“A few years ago I had a couple who wanted to do a documentary on Boom Shankar. I said ‘no, you should do it on Charlie’s story’. He changes his accent as soon as he gets on the plane. He’s always done it – I can’t believe how quick he switches. All those early years, we were here almost six months of the year and he was being taught by Indians at school.”

The Boom Shankar aesthetic evolved from an idea Ms Cameron had in the 1990s when she was spending a lot of time in Goa, to make old Indian wedding saris into tops and skirts for Western women.

“I met an old lady called Mrs Sharma  in Delhi. She had her own little stitching business and at that stage she looked about 110 but she was probably only about 70. I remember walking into this tiny little place in the middle of Delhi. It was crazy. She had a lot of old saris on the shelf. I was just going, oh my god, the colours, the sequins, the beads. I thought they were incredibly beautiful. I just started to play and  make stuff.”

She sold her clothes made of upcycled saris in Goa, and then began to sell at Eumundi Markets and wholesale across Australia. When her ideas began to be copied, she was pushed to do something different.

“It was the best thing because I moved in and started printing fabric,” she says.

“That’s the funny thing about fashion. You’re pushed to evolve and be creative. Nothing’s ever really yours. At the moment I’m working on summer 2022 and I have no idea what the fashion world is going to be doing then. I don’t look at what fashionable colours are for a particular season.

Sometimes I fluke it and sometimes I don’t. I’m working with master pattern-makers over here, which I love. My creative juices just come alive here.

“I work with a lot of block print, going from home to home working with different artisans in a particular area in Rajasthan.

“Then I work quite remotely with a lot of hand work. You can’t even contact me by telephone. I work with an amazing community on the border of India and Pakistan. It’s in no man’s land and I need a police escort.”

Ms Cameron’s Indian friends and colleagues call her ‘maharani’, which means princess, and that’s what she has been to them, supporting numerous families by giving them constant work.

“I do loads of charity work,” she says. “Ten per cent of all our profit go toward charity trusts. We do lots and lots of giving back… We do a lot of direct work with schools, farmers and community projects.

“I probably need to stop doing fashion and get more into that, which is probably my dream. I’ve been in India so long I’ve got so many contacts. There’s a lot of money here and it’s incredible how you can convince wealthy people to throw money into projects.

“The first place to start is Indians helping Indians. With education and knowing it’s not hard, it’s easy to change people’s lives, whether it’s one person’s life or a whole village.”

Blue fairy penguins
Out and about: Wildlife walk