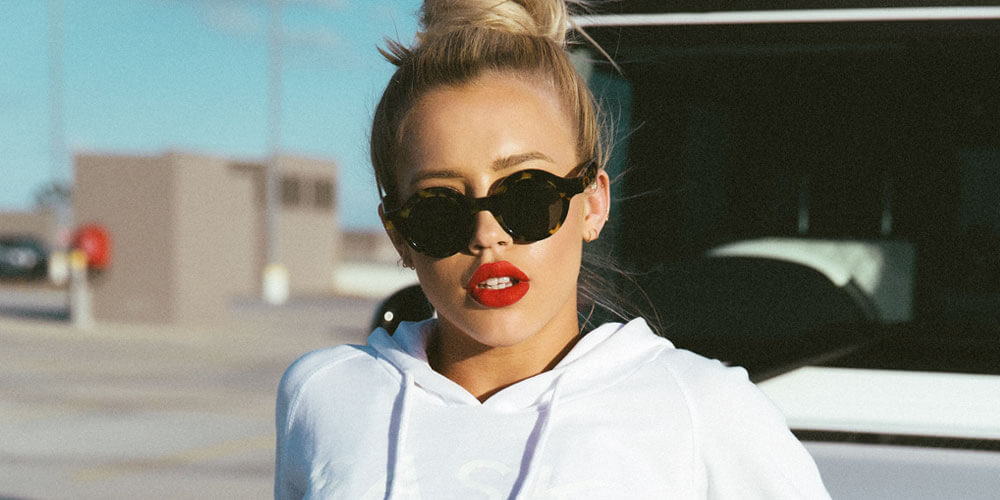 One Instagram post. That’s all it takes for reality television star and entrepreneur Kim Kardashian to make more money than most of us do in several years.

Each time the business-savvy beauty uploads sponsored content to the social media platform, she is reportedly pocketing $600,000 per post.

It’s no surprise that the celeb, who has 105 million followers, was named as the second highest earner on the platform in the 2017 Instagram Rich List, compiled by Hopper HQ.

She comes in behind songstress Selena Gomez who earns around $750,000 per paid post.

Meanwhile, American-based beauty mogul Huda Kattan, who has amassed 23 million Instagram followers, takes home around $24,000 per sponsored photograph, which landed her the number one position on the 2017 Influencer Instagram Rich List.

Today, around the world, there are thousands of people making a solid living from this method.

There are young men uploading comical, 10-second videos to YouTube and getting paid hundreds of thousands of dollars.

There are 20-year-olds vlogging beauty tips or parenting products in return for a hefty pay check.

Then there is Wengie, the eclectic and likable Australian fashion and beauty blogger who has seven million subscribers to her YouTube channel.

She is a millionaire thanks to her quirky hair and makeup tutorials that began from the comfort of her own bedroom.

This form of marketing is relatively new. It is creating a new generation of celebrities and careers and it comes down to that little device that 88 per cent of Australians hold in their hands – the smartphone.

The Digital in 2017 Global Overview report from Hootsuite and We Are Social showed that more than half the world now uses a smartphone.

Australians collectively check their phones a whopping 560 million times a day, according to the Deloitte Mobile Consumer Survey 2017.

That’s 80 million more times than in 2016 and equates to more than 35 times a day individually.

The report shows that smartphones, tablets and smart watches had the highest increases in market penetration and ‘peak smartphone’ ownership is close for 18–34 year-olds, with 95 per cent owning a device.

Not surprisingly social media usage, instant messaging and checking emails remain the most popular activities on our phones.

These are the two brackets on which social media is having the largest influence.

What this has translated into is a multimillion-dollar business for many young men and women.

It has turned ‘everyday people’ into mega stars, otherwise known as social media influencers. In basic terms, they are turning their followers into dollars.

“Yes I do (consider myself to be a social media influencer). I consider my role to be someone who is transparent and honest in what I promote and suggest to my fans.”

Meet Tammy Hembrow. This blonde bombshell is taking the world by storm.

From what began as a blurry selfie taken in her bathroom, Ms Hembrow is now one of the country’s biggest social stars.

She has more than seven million Instagram followers and recently signed a contract with Khloe Kardashian’s Good American clothing brand.

She has also launched her own active wear range, Saski Collection, and is a fitness mentor to millions.

Ms Hembrow is the CEO and sole shareholder of her two companies. Her day-to-day activities involve taking care of her two young children, managing meetings, vlogging, attending photoshoots, posting to her platforms and then heading into the office to approve product samples and host design meetings, followed by time at the gym.

This is definitely a new generation career.

And, the 23-year-old Gold Coast-based fitness guru has no hesitation in admitting it grew through social media.

“It mostly started from my dressing up, doing my makeup and developing good content,’’ she tells My Weekly Preview.

“I kept improving my content and my following kept increasing. I think I have a good idea and understanding of who my followers on Instagram are.

“I think when I got to around 10,000 followers I knew that this could be something big and that I could turn this into a job.

“I understood what got high engagement and saw the value in it straight away.

“I remember telling [partner] Reece in the beginning that I was going to turn this into a living and he was sceptical because at the time it was fairly new still.

“I took the opportunity and ran with it.”

Ms Hembrow has paved the way for hundreds of young women who are chasing the pot of gold at the end of the rainbow, many who hail from the Sunshine Coast.

Twins Renee and Elisha Herbert are now successful models and style influencers, each with around 500,000 followers.

Then there is stylist, photographer and lifestyle influencer Amanda Shadforth with a solid 833,000 followers, foodie blogger and stylist Kadence Edmonds who has attracted a cohort of 29,000 people with her beautiful plant-based treats, and parenting and lifestyle poster Georg Woulfe who has grown her online following to 63,000 people in the past two-and-a-half years.

Mooloolaba’s 19-year-old Dearna Eaton is the latest to take on the Instagram challenge with hopes of turning her photos and posts into a full-time job.

She shares beach and holiday snaps to her 14,000 fans and works alongside photographers to create the best content for her account.

About a year ago she was sent her first free product to promote and the free merchandise has continued to roll in.

“I’m on Instagram every day, sometimes for hours,’’ she says.

“The photoshoots can happen four times a week or just one a week. It varies.

“I’m hoping that the more I post, the more content I make and the more I create things that people want to see, the more my following will grow.

“I want to inspire people the way I’ve been inspired. I definitely want to make this a full-time thing.”

Even at a young age, Ms Eaton is aware of the role she plays.

“I have a young audience looking up to me. I want them to feel how I feel about who I follow… happy, uplifted and motivated to get out there and be adventurous.”

For some, it’s difficult to comprehend that a successful career, viewed at surface level, can be made from makeup, choosing the right outfit, baring perhaps a little too much skin and sharing tips.

For others, they admire and find inspiration from these influencers.

University of the Sunshine Coast senior lecturer in journalism, Dr Renee Barnes, says social media has become pervasive across all aspects of our lives – as a society we now socialise, meet partners and even find employment through this space.

Dr Barnes, who specialises in online participation, says while the term ‘social media influencers’ is relatively new, brands have been using influencers for decades through various mediums.

“Using an influencer, whether that be someone on social media or a celebrity endorser, is essentially drawing on that person’s credibility and authenticity to establish the same credentials for that brand,’’ she says.

“So previously we may have seen a makeup brand pay a celebrity as an endorser and that celebrity would be sure to use those products and discuss them in interviews.

“Now we see the same idea, but with people who have established credibility in a particular niche, for example fitness or parenting, through their posts on social media. The boom in this style of marketing is just a reflection of societal change.”

But exactly how ‘real’ are these posts and the people behind them, and are they having a negative impact on the youth who believe the story behind an Instagram filter is perfect?

Ms Hembrow, who has faced her fair share of criticism, says she is the real deal – what you see is what you get.

“You can’t always believe what you see on Instagram though,’’ she adds.

“That’s why I find it so important to be transparent with my followers. Some people say what I promote is fake – it’s not, it takes really hard work and dedication.

“But some people do promote unrealistic goals so you have to be careful.

“I want people to know that you can achieve your goals, but not without hard work and eating right. But nobody’s life is perfect.

“That’s why I like YouTube so much because it also shows different sides of me and my family.

“Like me without makeup, or when (son) Wolf is throwing a tantrum. Instagram is just one aspect of my life and I think if people keep that in mind and follow people they feel are honest and transparent, it can be a positive tool.”

“One of the things about social media is that if you aren’t transparent, if you aren’t authentic, then you are eventually found out.

The world of social media does not come without its pitfalls, with concerns also raised about the need to clearly identify paid endorsements.

In March, the Australian Association of National Advertisers amended the Advertiser Code of Ethics to ensure that sponsored content posts are identified.

“There has been an awful lot of research that shows that younger people are far more media literate when it comes to social media than the older generations,’’ Dr Barnes says.

“They are far more critical of what they see and authenticity is the key to longevity in these spaces.

“If you aren’t credible, if you aren’t authentic, then you will be found out or you just won’t garner the reach and profile needed.”

Of course, there is also the matter of trolling and cyberbullying.

“There is certainly a lot more work that needs to be done on ensuring that these online spaces are the inclusive and civil spaces that we would like.

“This is a combination of measures implemented (which social media platforms are constantly working on) by the Facebooks and Instagrams, as well as individuals, to ensure that the spaces meet our expectations of civility,’’ Dr Barnes adds.

Kadence Edmonds of Feather & Crumb launched her Instagram account in May 2016 and found it was a great way to explore creative photography and food concepts. Within six months she had amassed 10,000 followers.

Do you consider yourself an influencer? I am influenced all the time by other accounts. I don’t consider myself on the same level as big names like Ashy Bines, but I do know that my recipes, my ideas and my concepts do influence people all over the world. I have had a few paid jobs with the sole aim to influence people, and many product endorsements.

Is interest in food photos and blogs growing? Experimenting with on-trend and healthier ingredients led me to start pushing the boundaries and try and find a natural alternative for general ingredients. Food is definitely growing, and it is because of how aware most of the general public are of what we actually eat.

In your opinion, what impacts does social media have on society? I totally understand the negative impacts social media has, and I have felt this personally. The perfect lifestyles that are portrayed can definitely give someone a sense of failure if you compare yourself to what you see on some accounts. I have tried to avoid that with my account, I post images of the food that I actually eat. Some of the food spreads that I lay out may look extravagant, but I have the layout and style down to an art. Weekend smoothie bowls are created, laid out and photographed in under 30 minutes these days.