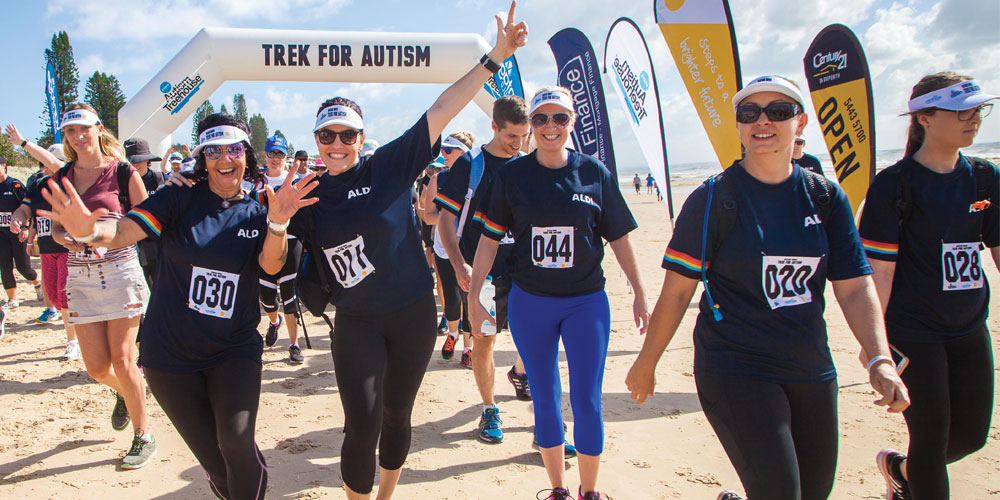 Cooper Gilmour is just like any other 11-year-old. He loves Fortnite, Star Wars, Lego and Angry Birds and will often talk about each of them with great enthusiasm and at length with his friends and family.

But when it comes to holding a conversation, he can take a bit longer to process a response, leaving him frustrated when his peers don’t have the patience to hang around to hear what he has to say.

This auditory processing disorder is one of the challenging aspects of having an invisible disability like autism.

April is Autism Awareness month and according to Autism Spectrum Australia, an estimated one in 70 people has Autism Spectrum Disorder (ASD), which equates to almost 250,000 Australians. Autism affects almost four times as many boys than girls and the term ‘spectrum’ is used to emphasise that the neurological condition presents differently in every single person. The diagnostic criteria for ASD changed in 2013 and now ranges from high to low functioning, encompassing Asperger’s syndrome.

People with ASD have a wide range of abilities, but they also face challenges around social skills and communication, and can have deep and often unwavering focus on their interests. Sensory issues, such an oversensitivity or undersensitivity to sounds, smells or touch, is also common.

Cooper’s mother Claire Gilmour says it took years for Cooper to be diagnosed. His speech failed to develop in his early years, he had some “monumental tantrums”, screaming if another child came near him, and had also taken great pleasure in lining up all his matchbox cars.

When looking on Google, Ms Gilmour found he didn’t match other ‘typical’ autism symptoms. He liked to be hugged. He made eye-contact. And she was told by a few general practitioners that “it was just a boy thing”. One finally carried out a developmental assessment and Cooper was referred to a pediatrician. He received his diagnosis right before his fourth birthday.

“[It’s] safe to say my whole world crumbled around me and I went into a state of grieving. Grieving for the life I planned for us, but mostly grieving for the challenges in life Cooper was going to face,’’ she says.

“Many, many questions circled amidst all the tears. So as any mother would do, I dried my tears, got my game face on and started researching and came up with a plan to give my little guy the best start in life. The tears do eventually slow down, I would like to say they eventually stop, but I would be lying.”

Having just returned to the Sunshine Coast as a single mother, Ms Gilmour says she felt incredibly isolated when they received the diagnosis and found there was no central place to go to for support. Like the other families struggling in silence, Ms Gilmour had to figure it all out on her own.

Determined that no one should go through this life-changing transition alone, Ms Gilmour established Autism Treehouse in 2012. The like-minded community group provides access to ASD referrals and resources, life skills programs and social events, as well as an understanding ear to listen and shoulder to cry on as families navigate this often-overwhelming journey.

In October 2017, the Autism Treehouse merged with the national disability organisation STEPS Group Australia to form STEPS Autism Treehouse, which has now assisted hundreds of Sunshine Coast families, building a supportive community that has strengthened the fabric of the region.

“The community has grown and embraced us,” Ms Gilmour says. “You realise so many families have been isolated and doing it tough on their own and Treehouse has created that sense of community and acceptance through our events, programs and support services.

“We are showing everyone that our kids aren’t weird or strange or naughty, their brains just work differently. They still want friends, to go to events, to be involved and included and it’s up to us to provide those opportunities where they can be included  in a safe, welcoming and supportive environment.”

Ms Gilmour says one of the challenging aspects of autism is it is often a hidden disability. “While they may lack some social skills or say inappropriate things, all it takes is more education of the broader community to be more accepting of differences and the fact that some brains just work differently.

“The sooner everyone can understand this, they will see that these kids bring a wonderful gift to other people’s lives. They are quirky and funny and when you remove  that judgement, you will have more understanding and support for the parent of the child who is having a meltdown in the supermarket, for example.”

The second annual Sunshine Coast Trek for Autism is fast approaching and at the time of print, more than 200 teams had registered for the 25-kilometre fundraising walk.

Ms Gilmour says Treehouse is also taking active steps towards developing programs and resources for parents and teachers in mainstream schools, funded by the Australian Government Department of Social Services. These schools are often under-resourced to properly assist children with autism.

Having facilitated countless opportunities for parents to come together through STEPS Autism Treehouse, Ms Gilmour says it warms her heart when she hears families feel like they have “found their tribe” once connected.

The Lee family from Kawana Island is one such family. They are still discovering the benefits of the organisation through their five-year-old son Mason.

Angela Lee and husband Jim made the inaugural Trek for Autism a family affair, taking Mason, then four, along for the walk in his pram while his brother Blake was strapped to Mrs Lee in a harness.

The family is again gearing up to take part. Mason was diagnosed with autism when he was two years old and is at the severe end of the spectrum. He is non-verbal and faces daily challenges with independence skills, self-help and communicating what he needs.

Using an award-winning app called Proloquo2Go, Mason can communicate with his parents, friends and teachers with his iPad by selecting images and symbols that the app then uses to speak for him.

Mrs Lee says alarm bells started ringing for her when Mason reached 18 months and was still not talking or babbling. They had his ears tested and found fluid, but even surgery to insert grommets and remove adenoids did not improve his speech. He visited a pediatrician just before he turned two and a diagnosis followed a behavioural assessment.

“They looked at him with imagination play and role modelling scenarios to engage what the expected response is versus what Mason’s response was,” Mrs Lee says.

“There was lack of engagement, eye contact and he wasn’t responding to questions and had a lack of interest in reciprocal play. He was diagnosed then and there and we were given a ‘what to do now’ one-pager with some helpful links and organisations on the Sunshine Coast that could help us and away we went.

“Even though I expected there to be some form of diagnosis, it is still shocking to hear that. Nothing quite prepares you.”

The Lee family has established a routine that allows Mason to continue to grow and thrive, enjoying the adventures of the great outdoors while indulging in his love of trains, sea creatures and YouTube videos.

“We wish people would ask us more questions, we would prefer for kids to come up and ask us how to play with Mason and ask what does Mason like rather than staring and pointing,” she says.

“Parents can ask questions rather than making their own judgment calls or moving their child away. We’d love to see awareness and openness continue to grow.”

“Every single day (and night) is a big struggle. It’s a sh*t show from when we open our eyes to when we get to sleep.

But it’s our sh*t show and we find joy in the craziest of things. I am truly blessed to have someone by my side who has the strength to carry me when I am fatigued and she is lucky to have me carry her when she is close to broken. The true strength of us really comes at the end of a hell week when we are broken together. But we have to get up, suit up and power on another day. That’s what all parents do, right?

Our day can change in the blink of an eye. Mason can go from having the best day in his life to a full-blown meltdown in the time it takes to say, ‘no wifi’. What makes it okay again? Maybe someone asking if we need a hand, or moving away and giving space, or even explaining to your naturally curious kids what a disability is.

What doesn’t help is standing and staring or even worse the ‘just needs a good smack’, comments. By the way, if you have ever made that comment, we forgive you. Prior to having Mason, we probably did rude inconsiderate things because we lacked awareness.

We find that the most normal things present the biggest challenges. We have certainly thinned out our friendship circle as we just can’t attend some things or have to attend alone.

In most cases, we don’t want to put Mason in a high-stress environment, in some cases we just don’t want to ruin your event. The reality is that we wouldn’t really get a chance to speak to you anyway as we are normally running around trying to stop Mason throwing sand on your grazing table, or trying to persuade him not to grab the heart-shaped balloon that is more attractive to him than a Paw Patrol tower is to most five-year-olds.

At this point I must say thanks to the many that do persevere with us. Who try their best to understand, who don’t see disability, who take as much joy in a moment of development as we do. You are amazing people.

If you want to help, please do the following for me. 1. Google “what is stimming” and pay attention. 2. If you see a distressed child/young person or even adult and you have any doubts, just ask if they need help. It’s a good human thing to do, autism or not. 3. Talk about Mason or another person with autism.

He is a beautiful boy who promotes love more than any other human I have come across. The most fundamentally important thing you could do to give him a better experience of this world is to help others to understand his world even a little bit. It’s an amazing place and may even change you.

Grab your team and lace up your shoes to take on the 25-kilometre trek from Tickle Park in Coolum to the Alex Surf Club on April 28 to raise money for STEPS Autism Treehouse.

Participants are asked to support STEPS Autism Treehouse by helping to fundraise a minimum of $250 per person.

Registrations are limited. Secure your place by visiting mycause.com.au/events/trekforautism.

If you cannot participate on the day, you can visit the website to make a donation or sponsor a friend instead.