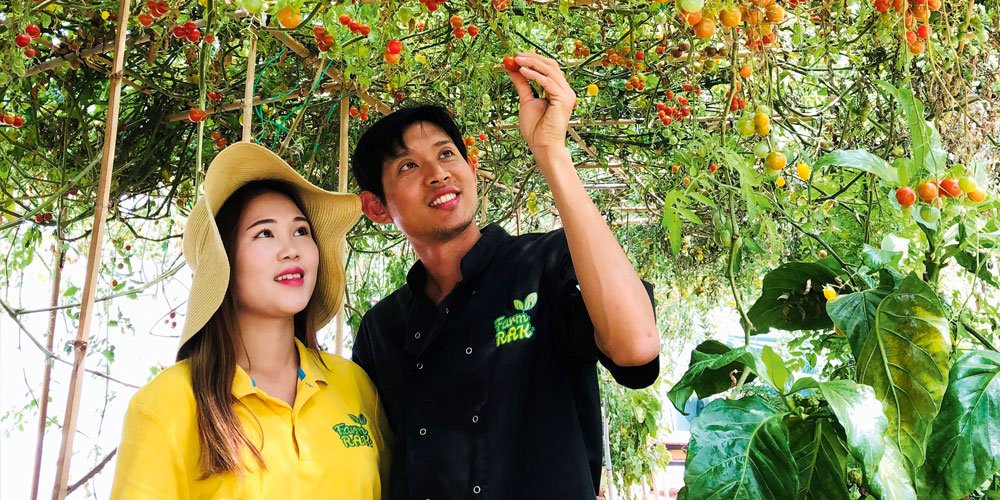 Almost overnight, a small shop in a back street of Buderim has become one of the most popular fish and chips shops on the Sunshine Coast, with people driving from Brisbane and standing in long queues to sample its fare. Customers hug its delightful owner, Nattapon Chumchujan – known as Nat – and call him an ‘inspiration’ in videos posted to Facebook, and he pleads with customers to order online as they can’t get through the phone orders.

Since Farm Rak was featured on ABC’s Landline program recently, Mr Chumchujan and his wife Gaeul (Bella) Kim say business has tripled and they are struggling to keep up with demand. Mr Chumchujan is only sleeping four or five hours a night, devoting all his waking hours to work. He rises early and spends seven days a week at the farm and seven nights a week at the Buderim shop.

So what’s so special about this out-of-the-way fish and chips shop? Ironically, not the fish and chips. Mr Chumchujan and his wife serve salads made with produce they grow on their organic aquaponics farm in Bli Bli, along with tempura vegetables.

“Since the Landline program I’ve been using three or four times more salad than usual,” says Mr Chumchujan. “Before, even the people who live near us wouldn’t have known we were there. People usually come in and we find it difficult to get them to try the salad and tempura vegetables, but now almost every single order they ask for it.”

An engineer and IT specialist, Mr Chumchujan’s passion is feeding people fresh, organic vegetables and he invested his money into the aquaponics farm with this purpose in mind. He says he’s not making much money out of Farm Rak, but that’s not the point.

“If I buy a house, it’s just me and my family I am feeding,” he says. “If I put the money into this project, I could potentially change the lives of many more people. People only thinking about themselves is what has turned this world into a lot of trouble and I hope that I can inspire more people to start thinking in terms of other people and not just themselves.”

Born in Thailand, Mr Chumchujan came to Australia in 2005 and lives in Bli Bli with his Korean-born wife. His mission is to get people eating organic vegetables and he’s committed to finding ways to make them affordable. His farm uses waste water from native jade perch, which is gravity-fed through grow beds to fertilise a variety of vegetables. It’s all spray-free and uses a 10th of the water used in traditional farming. He works with 70 growers in the area who offer spray-free or organic produce to provide whatever he doesn’t grow.

“A lot of people don’t think vegetables can be delicious and I understand that,” he says. “People don’t know what vegetables should taste like and they don’t know there is a massive difference in terms of nutrients and flavour in organic vegetables. It’s my job to let people know.”

Mr Chumchujan first heard about aquaponics in 2012 and as he researched it, he decided it was the way of the future. He started his Bli Bli farm project in November 2018 on just 1000 square metres of land – a small area considering the volume of food he produces.

“That’s why I can see this is the future,” he says. “From the amount of resources we use compared to the yield we’re getting, it’s just massive. A family of four would use more water than what we use at the farm.”

Mr Chumchujan says organic vegetables are costly because of the way they are produced and he’s committed to converting more people to buying them in order to improve the economies of scale.

“Who wouldn’t like to eat organic vegetables, but people don’t want to pay four times the price. You have to keep the price down so that everyone can get their hands on them. I don’t want it to be only top end. I want to keep my prices accessible so that people come and eat my vegetables.

“After Landline, we ran out of fish. I was so happy to tell customers, ‘sorry, we don’t have fish, we only have vegetables’. For me to get them to take the first step and start eating the salad and tempura vegetables, that for me is a good step. I hope there will be some more people following, doing what we do, changing the way things are going. At the end of the day, healthy families are the ones that will build the country. The brain works better and they are happier in their lives.”