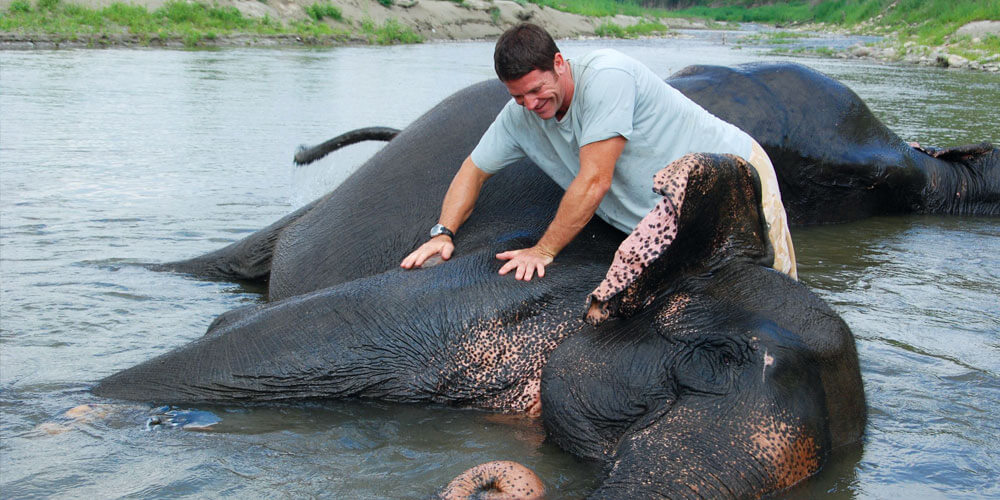 With the instinct, intelligence and athleticism of his favourite animal, the wolf, Steve Backshall creeps into crevices in search of spiders, scorpions and snakes, climbs volcanoes, dives with sharks, wades through caiman-infested wetlands and is seemingly fearless in his pursuit of freaky creatures to feature in his BBC nature documentary series Deadly 60.

Now airing in 137 countries, the show has snared a global audience of children who idolise the adventurer, and parents who find themselves planted on the couch with the kids, equally enthralled.

In 2011 he won a BAFTA award for best children’s television presenter, while Deadly 60 won best factual series. Then in 2014, Mr Backshall won a legion of female fans when he donned a pair of tight pants and an unbuttoned shirt and swivelled his hips for UK show Strictly Come Dancing. The self-confessed workaholic holds a black belt in martial arts and is an author, having written 13 books including his children’s adventure fiction series The Falcon Chronicles.

The multi-talented dynamo is in Australia during January and February for his Deadly 60 Downunder tour, which will visit 18 locations around the country – and before your kids ask, his favourite Aussie animal is a toss-up between the thorny devil and the weedy sea dragon.

After his first two Australian tours sold out, he’s back for a third tour, which will bring him to the Sunshine Coast for the first time.

To kids, the BAFTA award-winning presenter, writer and naturalist is a real-life action hero, but even heroes need their own idols to look up to, and Mr Backshall’s first hero was his dad.

“I just wanted to be him. He was massively into the outdoors, he was a very good natural athlete and he was my absolute idol, and I guess he kind of still is,” he tells My Weekly Preview.

Mr Backshall grew up in a ramshackle house on a farm surrounded by animals. His parents, who both worked for an airline, took the family on adventurous trips to India and Africa, where Mr Backshall’s passion for far-flung places and exotic creatures was cemented.

He studied English and theatre at university and his first job was writing for Rough Guides in his early twenties on a dismal wage. However, his real dream was to work with animals, so he created a job for himself. He bought a camera and self-funded a trip to Colombia, where he filmed himself traipsing through the jungle discovering wildlife. National Geographic immediately spotted his talent and signed him up for five years as their resident adventurer.

Mr Backshall’s unbridled enthusiasm for wildlife and infectious way of presenting his encyclopaedic knowledge of zoology has earned him comparisons with the late Steve Irwin and even Sir David Attenborough, another of his heroes.

“For anyone who does anything vaguely connected with what I do, Sir David Attenborough is an amazing hero,” he says.

“I’ve been lucky enough to go to live events and see him speaking and he’ll have a room of hundreds of people hanging on his every word.

“As far as influences go, I think Steve Irwin probably did more to increase the awareness of and interest in reptiles than anybody else in history,” he says. “I think his enthusiasm for and appreciation of, particularly crocodiles and snakes, took those animals worldwide to an awful lot of people who should not have been less interested. I think his charitable work and work in conservation wasn’t understood until he sadly passed.”

Like the Crocodile Hunter, Mr Backshall’s gift is getting people who wouldn’t normally watch a nature documentary, particularly children, to be completely riveted with the wonders of the natural world.

“It is my great shame to have been a part of the generation that has done more to harm this planet than any other,” he says. “I’m ashamed I’ll be leaving the planet in a worse position than it was when I got here.

“A big part of my job is to let young people know that it’s in their hands now. They have a tremendous power to make a difference; they really can stand up and make the planet a better place and we’re relying on them. It is possible to reverse many of those changes, it is possible to start to set some of those ills right. Seeing that excitement and enthusiasm for making a positive difference, it’s just brilliant and that is why I do what I do.”

Steve Backshall’s Deadly 60 Downunder is on at The Events Centre Caloundra on Friday, January 12. Catch Deadly 60 on ABC iview.