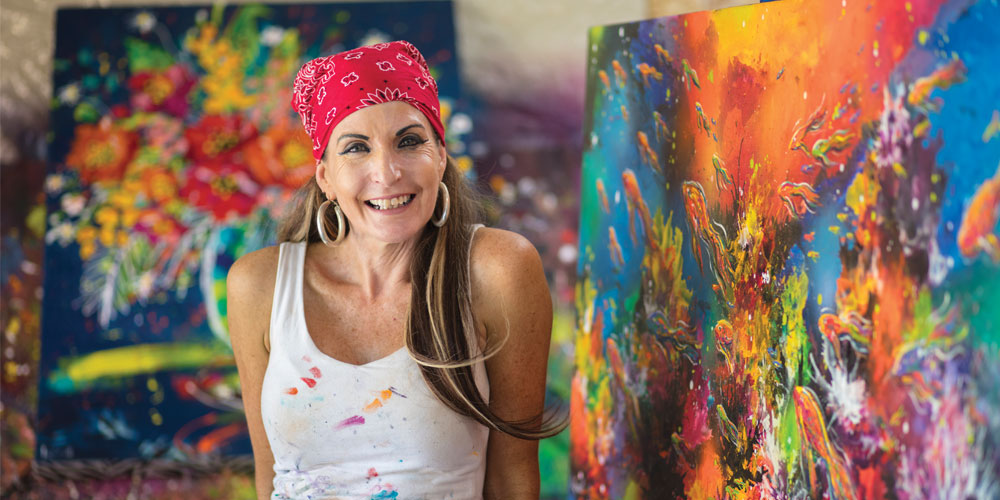 When trained opera singer and lead character of ABC Kids’ show Lah Lah’s Big Live Band Tina Harris walks into a daycare centre and asks the children how many of them can sing, the entire group will put up their hands.

When she visits a kindergarten and poses the same question, she might get 75 per cent of the class raise their hands.

Moving on to lower primary, and the number drops to 25 per cent and by the time you reach high school, Mrs Harris says she will be lucky to get one or two students confident in their ability to sing.

So what is it that makes us start to question our inherent creativity and become self-critical of our abilities? And do we really lose our capacity to be creative as we age?

Historically, the Torrance Tests of Creative Thinking has been a means of tracking creativity in people of all ages since the 1950s. In similar fashion to an IQ test, it involves completing a series of tasks that measure a person’s ability to produce something original and useful. While there is no ‘right’ answer, scores are tallied up by the administering psychologist based on the uniqueness of the outcome.

In every generation since the testing was introduced in the US, IQ scores have risen, and Torrance test scores were also rising at a similar pace. That was until the 1990s hit. Since then, Torrance results have consistently dropped in American children.

Mrs Harris says the staples for creative expression – music, arts and drama – are being given less weight in our education system as the Australian education system rapidly gravitates towards STEM (science, technology, engineering and maths) learning and our children face a similar dampening of creativity as a result.

It is a long-held bugbear of Mrs Harris, who says there are “many studies showing creative arts improve a student’s capability to tackle and improve in these other subjects”.

“Music should be up there with maths, English and science. All parents want their children to be happy and well-adjusted socially and to strive in life. We want our children to succeed and to be happy, so why aren’t we demanding more as parents that our kids have to study music or join an ensemble?” she says.

“It builds a sense of community, social skills and team work as well as engaging different parts of the brain, which creates new neuro-pathways and builds overall thinking capabilities.”

It was bucking against advice from a teacher that saw Buderim resident Kendall find her feet as an acclaimed international artist. The mother of two says she was told by her then-primary school teacher that “no one makes money out of art”, but it was all she had a burning desire to do with her life.

So she ignored the naysayers and pursued her passion to find immense success.

“My creativity has seen me through some of the best and worst moments of my life. When I go into the studio, everything comes out through my hands,” she says.

“That stems back to when I was at a Catholic school and I was the only child whose parents were divorced.

“I used to get bullied something terrible about it. I would sit under a tree every lunchtime, grab a pencil and just draw. It took me to another place. I could create a world around me and it took me from the world I didn’t want to be in.

“Now my studio is like a place of solace for me. I go in there and close the doors and I’m in another world. All I have is the creation in front of me.”

She worked with children before she had daughters Brydie and Hatsie and Kendall says she finds children’s art “just divine”.

“I used to do adults art classes and they would have to have Champagne before we started. They can be so regimented and so structured and they are all worried about what the other people are going to paint. I’d spend time trying to loosen them up and telling them not to look at what the person next to you is creating,” she says.

“That’s how life goes as we get older – we are always competing, trying to be better than everybody else.

“What I love about kids is that they do their own thing and then they all tell each other how great each other’s paintings are. There should be an Archibald Prize for children; as adults we can learn a lot through them. Art tells a story of what is going on in their minds at the time.”

Kendall says as we get older, life does become more serious as we start to look for work, get a mortgage and deal with the daily bills and living expenses.

“What happens is we become a product of our environment. The whole world is way too serious and many of us are victims of our own self-importance and people need to lighten up,” she says.

“I think you need to take a breath, step outside the square and work off that theory, ‘nothing’s right but everything’s right’. If you find something you love, take a deep breath and go headfirst into it and what’s the worst thing that can happen?

“I just think there’s too many inhibitions and thoughts of ‘this is what society expects of us’. But what do you expect of yourself? Be yourself because everybody else is taken, that’s a saying I live by.”

This ethos has been instilled in her daughters, who have both gone on to creative pursuits – Hatsie as a barber and Brydie as an artist in her own right.

“When they were babies, the girls would be in the kapoochie [baby carrier] in front of me while I was in the studio and they would have paint all over their feet and their nappies and as they were growing up, I wouldn’t allow colouring in books in the house because they stifle creativity – you need to go outside the lines and you should never have to fit inside a box,” she says.

University of the Sunshine Coast creative writing senior lecturer and author Dr Ross Watkins says although he first set out to become an author at the tender age of eight, he had to nurture that passion for creativity by maintaining discipline.

“You might think discipline is a word that is contradictory to imagination and creativity, but certainly as I’ve gotten older, with so many demands on my time and so many distractions, discipline is one of the most important elements. It allows me to sit down, focus and to carve out that time to invest in creative expression,” he says.

“One of the main issues is creative expression is often the first thing pushed aside for what we deem to be more pressing things.”

Dr Watkins says imagination and creativity are important for people of all ages as a means of exploring the unknown.

“For children, it could be something as simple as imagining what’s under the bed and as we get older, we begin to use these skills to project ourselves into experiences that we are yet to live, but that we might want to ‘try on’,” he says.

Dr Watkins believes that we don’t lose our capacity for creativity as we age. Instead, it simply morphs to suit our mental capacity.

“The assumption that we lose imagination with age can be misleading because it plays into romanticised ideas of childhood and fails to recognise the ways we adults use imagination in our daily lives,” he says.

“Children are also imaginative in different ways – some use it in creative play, some use it to construct and others use it to do maths. If we generalise imagination I think we’re in danger of misunderstanding what it is and how it can be expressed.

“Imagination is played out on an everyday level and it often comes to me while doing menial tasks, like washing up or vacuuming the house because I allow my mind to go to creative spaces.”

This is a theory mirrored by computational neuroscientist Paul King.

When asked why younger people are more creative, Mr King says as people become “good at life”, they develop habits of thought that allow them to “effortlessly” adapt to social norms and accepted ways of thinking and in the process, become “prisoners of our own success”.

“Sticking with what works makes us both more successful and less creative. Why be random when you can be right? Unfortunately, this leads us to miss the enigmatic paths that lead to unexpected surprises,” he says.

“However, people who are in creative professions develop personal systems to stay creative.

“They may seek out people outside their profession, read random things, or force themselves to brainstorm whimsically.

“This systemisation of creativity doesn’t have the bizarre arc of childhood imagination, but does combine life experience with creativity in a way that can be more impactful – and higher paying – in modern society.”