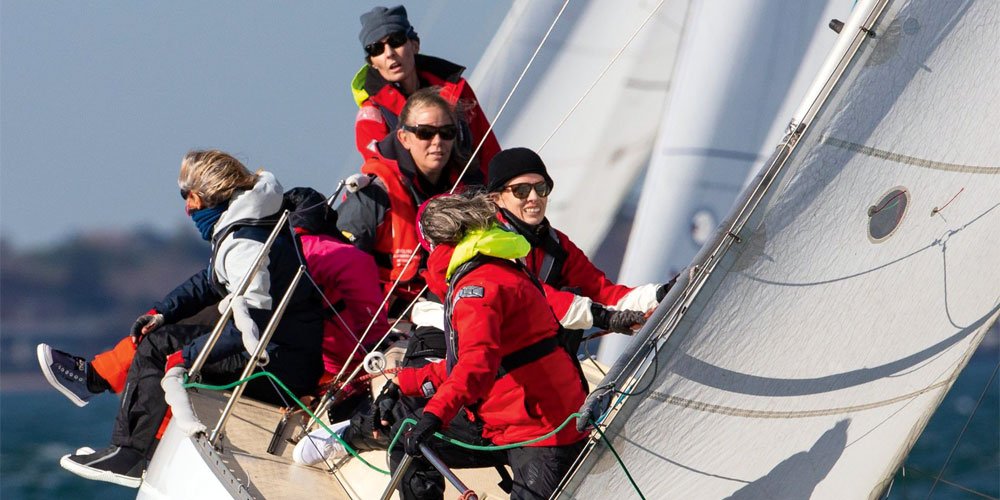 Sunshine Coast women aren’t waiting to be asked anymore, they are taking charge of their sailing experiences and driving up participation numbers.

The “man’s world” of earlier decades is fast disappearing. Gone, for the most part, are the old days when some skippers “wouldn’t even have women on their boat because it was bad luck” recounts Margie Brown, the skipper of the all-female crew that won the 1986-87 Mooloolaba Yacht Club (MYC) championship.

Gender equity is being driven by a new breed of female sailors.

Young mothers, school and university students, professionals – pick an age, any age from youth to senior – and you are looking at a cohort that is growing rapidly.

MYC sailing manager Suzanne Mabbott says there has been a huge change in the club with women members now making up 40 per cent of the membership of 327.

And those women are successfully taking their racing skills to all-female regattas in Townsville, Darwin, Melbourne and Sydney as well as in mixed-gender regattas.

Standing on the podium is becoming a habit for the Coast sailors.

Last year, yacht owner Tanya Kelly, 44, and her all-female crew raised their division-winning trophy at the Airlie Beach Race Week for the first time. “We raced really hard and left everything on the water,” she says. “We were exhausted at the end.”

The Sunshine Coast Hospital and Health Service director of anaesthesia and mother of three teenagers started sailing in Sydney in her teens. While she played several sports in her youth, sailing captured her. “It seemed to have a huge depth in it,” she says. “There was a lot more to learn. I still feel that way. It always involves other people, is extremely social and it often takes you places.”

Her three children are all involved in the Maroochy Sailing Club’s dinghy sailing program. Husband Guy Godsall, however, is “not at all” a sailor Ms Kelly reveals.

When she gets home from a tough day on the water, it’s soccer player Eamon, seven, who quizzes his mum on how she went. “I am pretty honest about my shortcomings and he really likes that. One thing he gets out of an active sailing mother is someone who is also involved in competitive sport and we can have those kind of conversations.”

While the Sunshine Coast Yacht Club warmly welcomes female sailors for its twice weekly keelboat races and the Maroochy Sailing Club (MSC) provides an excellent learn-to-sail program for all school children, it’s the MYC that is seeing the greatest benefit from the surge in female participation.

The MSC, which has about 100 members during its racing season from August to May, is the nursery for many young Coast sailors through its Tackers program for under 12s. It provides a “sailing pathway” to the big boats, says vice-commodore Gard Saunders.

University of the Sunshine Coast civil engineering student Sarah Johnson, 20, is a product of the MSC’s thriving dinghy program. She started sailing there at 12.

After spending several years racing in a single-handed class, Ms Johnson dabbled in the tough match racing at the national level. At age 15 she was the only girl in the Coast team. She went on to join the MYC Women’s Program.

The highly competitive young woman also takes her skills south to Brisbane to race on a fast sports boat in a mixed crew.

Ms Johnson might be quietly spoken, but her technical mind suits the key role of tactician in this team.“On the water I don’t think gender plays a part in the communication or the roles on the boat,” she says. “We are focused on racing. I don’t feel really different being a female.

“I am super lucky my opinion and my calls are essential on that boat.”

Ms Johnson competed with the MYC women’s teams in the keelboat regatta in Melbourne and completed her first ocean race in the company of member Karen Young in the 2019 Melbourne to King Island Race.

“The program at Mooloolaba is good for women who are new to sailing or women who have done a lot of cruising. It encourages them to start racing,” Ms Johnson says.

“I have definitely seen a huge change in the number of women at Mooloolaba, but not really in my age group.”

She has seen girls staying with the sport after learning to sail at the MSC where they can find racing that is exciting and relatable.

Lauren Twigg, 48, has time on her hands. The Qantas pilot is using being grounded to get back into sailing and to support her two daughters who are learning to sail through the MSC.

She previously skippered one of the Coast’s all-female AUDI sports boat teams that campaigned boats off Mooloolaba and raced in the 2009 world championship in Portugal.

With the pressure of starting a family and working full-time she took time off from racing for about 10 years. But now she is back. At MSC, Ms Twigg is happily filling the role of “canteen lady” and supporting her two daughters as they follow the same sailing pathway as their mum.

In Mooloolaba she is mentoring members of the MYC women’s development program. “I have just qualified as an instructor so I can also help out with the Discover Sailing program,” she says.

“The development program is fostering a community feeling. It is helping women build their confidence and it’s such a nice social feeling and I think that is encouraging more women to start and stay involved. Once they have more confidence, they can go racing. It’s a place to find your feet and have a bit of a laugh while you are still learning.”

Ms Twigg has excelled in her sports boat racing and even tried ocean racing, but small boat sailing is still top of her list, which is why she so enjoys racing on the MYC’s small keelboats. Racing hard and fast remains thrilling for her.

Her body might sometimes find the going hard on the smaller boats but “I love the competitiveness and getting involved in the regattas” she says.

Are these women ambitious? Absolutely. Are you they trying to prove a point? “In the future I hope that you don’t specifically have women’s programs,” Ms Kelly says. “I think it’s great sailing in mixed fleets.

“Historically the women didn’t have the opportunities they have now. The Women’s Program is one of those ways of encouraging women into the sport. What it is doing is shifting the mindset of a lot of women in sailing to being competitive sailors and if they’re not interested in the competitive side, certainly to having more senior roles on a boat when sailing.

“What it is doing is increasing knowledge and skills so that women have a lot more of a say in terms of what they do in their own sailing career and what they do on a boat.”

Seat of the pants learning has left the room for the most part. The women asked for structured training and specific outcomes and that’s what they are making happen. Since 2013, the MYC has run a buddy system Women’s Sailing Program. The start was hesitant while the women learnt to handle sailing on the confined areas of the river at Mooloolaba in the club’s four identical six-metre keelboats.

They organised local racing events and lots of training, but initially no major away events were in the mix.

Finally, under the leadership of yacht owner Kerry Teed, in 2018 the momentum of the program changed dramatically. The MYC put together a team of sailors to contest the annual and bitterly cold June Australian Women’s Keelboat Regatta in Melbourne. That year Ms Kelly’s crew finished third in their division.

While the club previously hosted the national youth and women’s open one-on-one match-racing regattas, the Melbourne event was the first foray for the local sailors into the world of competitive fleet racing. Last year the Ms Kelly-led crew repeated their podium result of third place in their division.

The women are now training for the MYC’s second annual SheSails and Next Property Group-supported Women’s Keelboat Regatta, which is on October 31 and November 1 on the river in front of The Wharf Mooloolaba.

“The women from our program are starting to go out on the keelboats, racing in mixed crews,” Ms Mabbott says. “The guys were sceptical to start with but now because our teams have been out there racing elsewhere and getting good results, they are tending to engage more and that has allowed for more opportunities for the women to go out and sail on the bay on the keelboats on Sundays and Wednesdays.”

Ms Mabbott adds, “The little club that can do” has grown to become the Queensland leader in women’s sailing with other clubs coming to the MYC club for advice on how to put in a place a sustainable women’s program.

The national program encourages females to engage in every aspect of sailing from crewing and skippering boats, to administration, race and even management, marketing and media.

Whether it’s the first time or returning to the sport, there are a variety of activities both on and off the water for women to get involved in.

From October, adults will be able to learn to sail through the nationally accredited program being run by Mooloolaba Yacht Club.

People from all backgrounds, ages and abilities will find out that sailing is fun, safe accessible and affordable.

Discover Sailing courses are held in small groups with similar levels of experience and guided by qualified instructors. Boats and life jackets are provided. No special clothing is required.

The ride of his life
Free your mind

Win a book – Kick Depression in the Guts