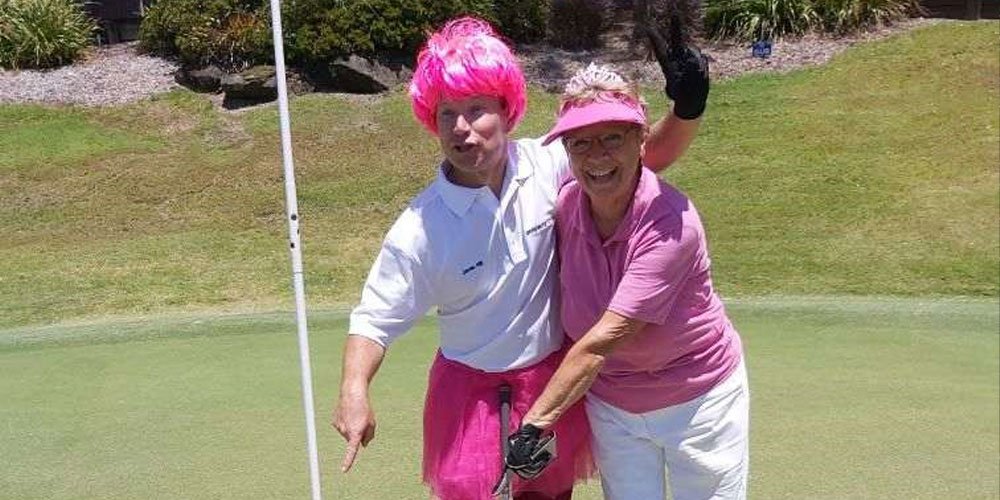 It’s a strange outfit for a real estate professional – to don an outrageously pink wig and matching pink tutu – but it’s for a very good cause.

Property Today’s Jamie Hill loves the chance to go pink for the Cindy Mackenzie Breast Cancer Program and to play a round of golf in the company of equally passionate charity supporters.

Achieving a hole-in-one, not once, but twice in the last two years, and both for the same supporter Helen Fraser, well, that’s just icing on the cake; pink icing that is.

“The odds I worked out for a hole-in-one for the same lady, two years in a row, is about one in a 156 million chance,” Mr Hill says. “I haven’t really done the probability calculations outside of that.”

Property Today has been involved in community sponsorship for 13 years. The business has so far raised an impressive $140,000.

Choosing to support the Cindy Mackenzie Breast Cancer Program is a result of many women Mr Hill knows going through breast cancer.

Pressed upon by the 116 JUGS women players at his home club Headland, the accomplished golfer each year hits a ball for a donation from the women for the charity’s fundraising golf day. This year’s much smaller late October event raised $4000.

The charity’s program coordinator Lisa Daldy says the community support this year has been “incredible”.

“It’s amazing what they have been able to do in this difficult year,” she says.

While the final numbers are still to be worked out, Ms Daldy says the community has raised just shy of $15,000. “The fact that the money is going to support local families has made a big difference,” she adds.

Property Today’s generosity doesn’t stop there. Wait a moment; Mr Hills had to put the phone down for a minute to pick up his driver for a what he wanted to be a 310-metre shot but probably was a 260-metre shot down the fairway for the Alex Surf Club fundraising golf day. Mr Hill admits being out on the golf course and raising much needed raising community funds “makes you feel good”.

Next year he plans to raise the bar with even more pink in his outfit and double the Property Today contribution for a hole-in-one.