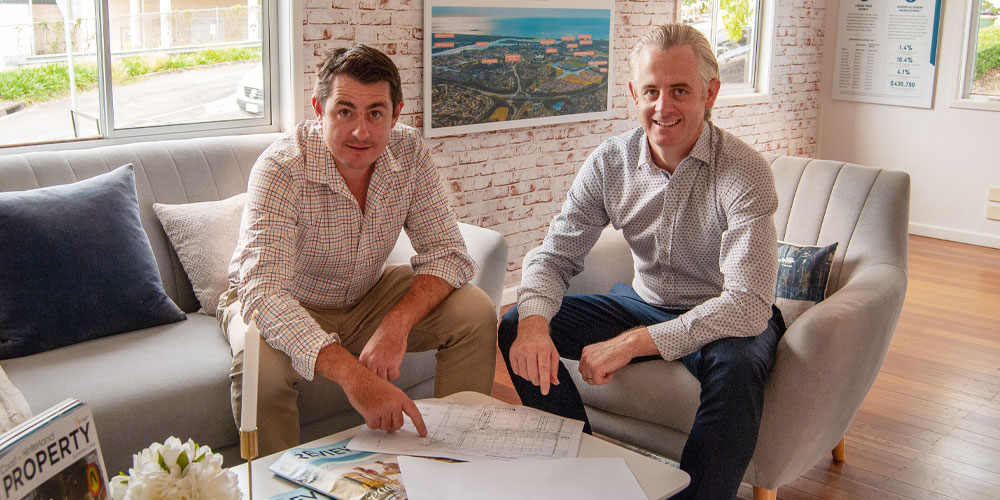 Josh Myers and Remi Rafter at work in their Maroochydore office

Remi Rafter and Josh Myers, two 30-something Sunshine Coast mates who forged a friendship while serving in the Australian Army, say the values they learned in military life have worked well for them in the hard-nosed business of property development.

“Principles such as respect, integrity, ethical conduct and professionalism are drummed into you in the Army and have provided us with a great grounding in business,” says Mr Rafter, 36, whose family has been involved in property valuation and sales on the Coast for decades.

“They have put us in a good place to manage other people’s money,” he says.

Mr Rafter and Mr Myers, who now operate the successful Sunshine Coast-based property development company RM Developments, are part of a new generation of property entrepreneurs in the region, overseeing a portfolio of up to $500 million in projects.

They met in January 2003 at a signing ceremony in Brisbane after they’d both enrolled as officer recruits in the Australian Army. Over the next decade, they shared experiences that included earning university degrees in civil engineering and business, building housing and medical infrastructure in the Australian Outback, and delivering a $60-million project in Afghanistan, where 1100 military personnel lived and worked.

When they left the Army in 2014 they settled on the Sunshine Coast, Mr Rafter securing a position as a development manager with the Reed Property Group, and Mr Myers landing a job as a project manager for development consultancy, Project Urban.

In 2017 they joined forces and launched their own property development company. Initially, the firm focused on development management work, typically for a landowner or investor.

The two young entrepreneurs were ambitious, however, and impressed clients and contractors with their attention to detail and their ability to identify, and overcome, challenges within the construction process.

“We’re very thorough and conscious of the risks involved,” says Mr Rafter. “We expect high standards from our suppliers and sub-contractors. I suppose we’d be considered hard task masters.”

A key focus at present is a residential apartment project in South Brisbane, with 312 apartments in a high-rise complex occupying 2600sqm of land.

RM Developments is acting on behalf of a syndicate comprising a superannuation fund and a foreign listed property developer to deliver a project that could be worth as much as $300 million.

The company has just launched its own $32-million residential development in Maleny, comprising 63 large lots ranging in size from 800sqm to 1728sqm, with prices starting at $499,000.

They are also putting the finishing touches to a $40-million mixed use residential and commercial development adjacent to Maroochydore’s massive Sunshine Plaza shopping complex.

Both men are active supporters of Mooloolaba Surf Lifesaving Club, patrolling the beach as lifeguards, as well as being commercial sponsors.

Solar storage the way of the future
The future of property