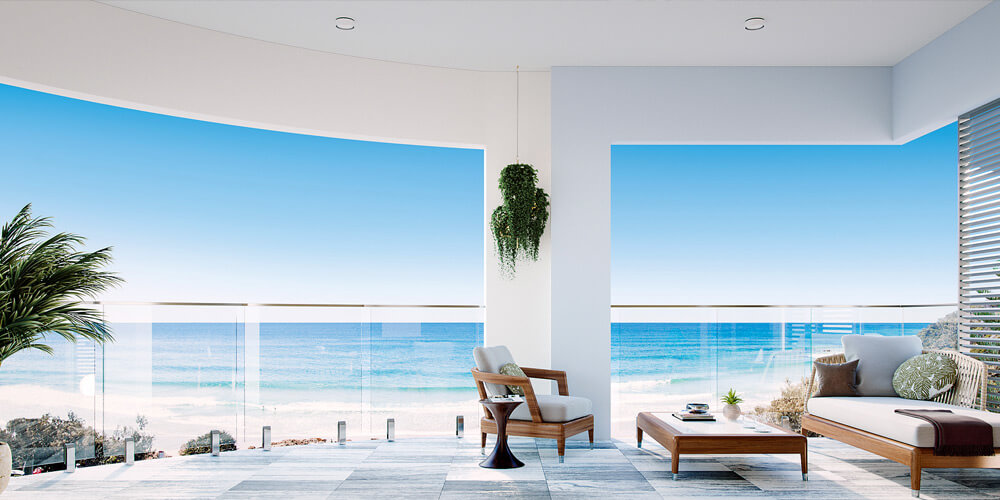 In the meantime, other developments have already been given the green light and are surging ahead, bringing much-needed property stock to an in-demand area.

First Bay Coolum has already captured the attention of plenty of home hunters across the region, despite being weeks away from its release to market.

Sharing its name with the popular beach it overlooks, the new 24-apartment development has already recorded more than 100 expressions of interest – a figure project architect Ken Down attributes largely to the iconic coast location.

“Whether it’s memories of days spent surfing, exploring the rock pools or building sand castles as a child, First Bay holds a special place in the hearts of many Sunshine Coast locals,” Mr Down says.

Developer Mel Luke says First Bay Coolum is set to officially launch to market in late November, and he looks forward to officially unveiling the design concepts and floorplans at the launch. Construction is scheduled to begin in December.

“A lot of heart and soul has gone into creating a development that will meet the aesthetic of the local area, as well as the lifestyles of those who will ultimately live there. These are not holiday units, they are all house-sized apartments of at least 200m2 which feature expansive balconies to enjoy the views or entertain family and friends.”

Not too far away, Mosaic Property Group is bringing its third Sunshine Coast luxury apartment project to life.

Drift by Mosaic offers a rare  north-facing oceanfront position and will have 56 one, two and three-bedroom apartments, sub-penthouses and penthouses across four levels.

Drift launches to the market on the back of award-winning Mosaic’s overwhelming sales success at its first two Coast boutique apartment projects, Cyan and Solis at Kings Beach in Caloundra.

Mosaic Property Group managing director Brook Monahan says Coolum is the ideal location for the company’s next foray into the picturesque coastal region.

“Coolum is unique because it has managed to remain ‘under the radar’ and avoid the hustle and bustle that you see in other parts of the Sunshine Coast.

“This laidback character has made Coolum a coveted location for people wanting the best of beachside living and that’s what we plan to deliver with Drift  by Mosaic.”

Set to rise at 1722 Coolum Esplanade, Drift is designed for low-maintenance luxury beachfront living with each apartment featuring a gourmet kitchen, spacious bathrooms and free-flowing open-plan interiors that are perfect for relaxation and entertaining.

As with Mosaic’s Solis project, Drift has secured a six-leaf EnviroDevelopment certification. Construction of Drift is scheduled to start in February 2018 with completion anticipated by May 2019.