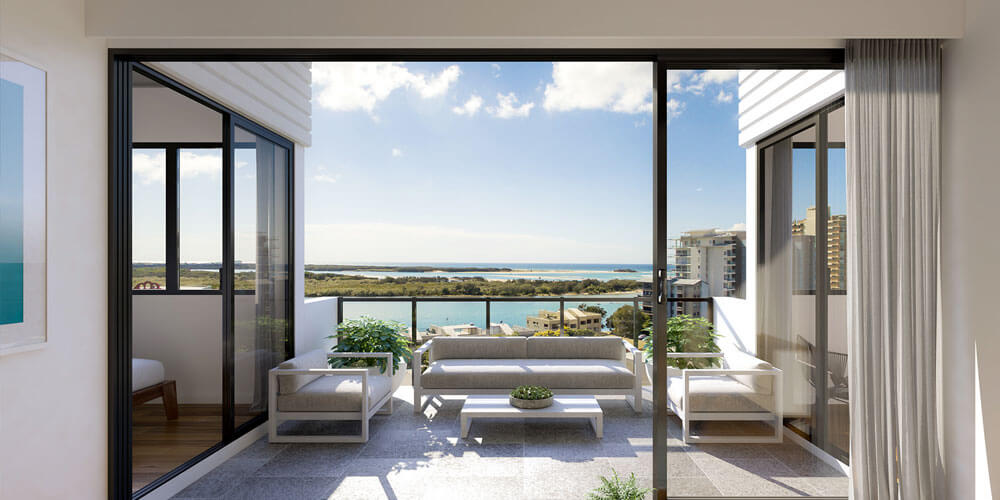 A Maroochydore development is giving new meaning to the term ‘out with the old and in with the new’, with the Gill family eagerly awaiting the transformation of their long-held family properties into one of the Sunshine Coast’s first urban renewal hotspots, The Rhythm on Beach.

While owners Irene Gill and her son Allen ‘Jim’ Gill have now moved into a care facility, Jim’s wife Marcia and daughter Debbie have called Beach Road home for many years and their time-honoured houses are set to make way for brand new, architecturally designed apartments.

Marcia says she grew up on the Sunshine Coast and had lived by the Maroochy River for decades, so she felt a deep connection to the area.

“Maroochydore has this way of developing a hold on you, and its charm makes it a place that you always want to come back to, no matter how many years have passed,” Ms Gill says.

“This was also very much the case for my husband and his parents, who all lived and worked locally.

“My mother-in-law, Irene, actually worked at the Swan Bowls Club in Anzac Avenue for 36 years, so much of her life has been spent as part of the Maroochydore community.”

Ms Gill says the two Beach Road properties undergoing urban renewal had been in the family for 65 and 48 years respectively.

“There’s something nice about paying homage to my family’s heritage and remaining on the site, while also turning over a new leaf and really embracing The Rhythm on Beach’s urban city design,” she says.

“I love that I’ll be able to see the water from my balcony and can still visit friends at the nearby Bowls Club or even head out for a coffee without needing to get in the car.”

Ms Gill will move into an eighth-floor apartment with views of the Maroochy River, while daughter Debbie will take up residence in a two-bedroom apartment on level six.

She said The Rhythm on Beach had struck the Gill family as the perfect offering for breathing new life into their beloved patch.

“After purchasing the land and watching the Sunshine Coast expand over the years, my husband’s parents recognised their properties were ideally located for commercial enterprise or residential units,” she says.

“We were always aware of the site’s potential but as a family, we knew it was important to wait until the right development came along to really do it justice.”

Maroochydore Urban Renewal managing director and developer of The Rhythm on Beach, Matthew Stanley, says the Gills’ decision to take up residence at the new development is testament to both the project and the first-rate location and lifestyle the area afforded.

“In a city that’s very much coming of age, we’ve made a concerted effort to design a building that departs from more traditional, resort-style apartments and instead combines urban chic with earthy facade treatments and picturesque landscaping,” he says.

“Japanese onsen-style pools have been incorporated into the design and we’ve focused on creating a space where residents can connect, unwind and recharge.

“Residents and visitors alike will also have access to a brand new bar and cafe on the ground floor, which will continue to build on the thriving hub of Ocean Street and surrounds.”

The Rhythm on Beach is a 72-unit, eight-level property development, comprising of two and three-bedroom generously sized floorplans with underground parking. Located at 20 Beach Road, Maroochydore, the development is currently selling off the plan from $450,000, with construction expected to commence in March 2018.