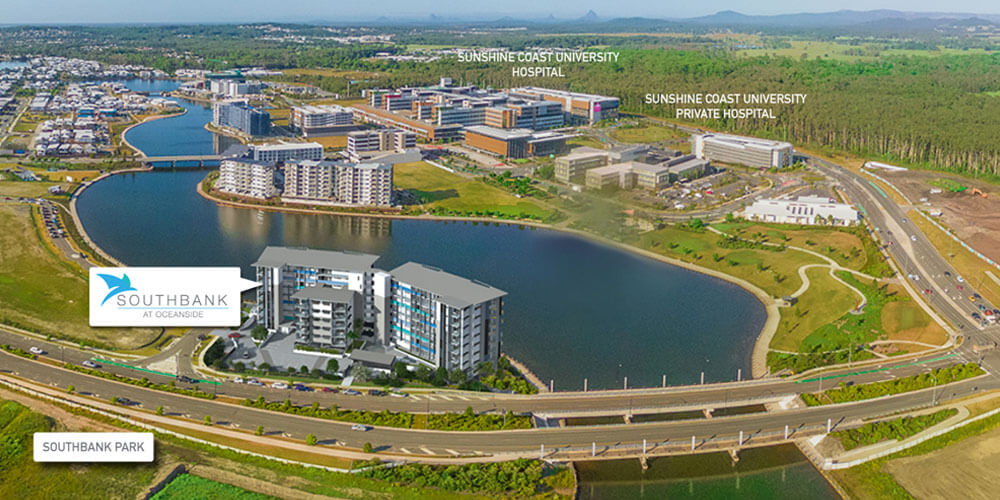 When speaking to My Weekly Preview earlier this month, analyst and social commentator Mark McCrindle predicted people of all ages, from first home buyers through to baby boomers downsizing, buying property on the Sunshine Coast would seek out “walkable cities” in which to base themselves.

If the success of the Sunshine Coast Health Precinct and its surrounding property are anything to go by, Mr McCrindle is right on the money.

The precinct has been dubbed “hot property” and the “healthiest investment” in the region by local industry experts and the numbers do not lie.

The RGD Group launched Southbank, its fifth apartment development in the health precinct, last week to great fanfare. Its previous four projects completely sold out prior to completion.

RGD Group managing director Ron Grabbe says the North Shore, Salt, Waterline and Aquarius apartment buildings, which are all located in Oceanside Kawana within walking distance of the Sunshine Coast University Hospital, have a combined value of $120 million and all 240 waterfront apartments were sold in the past 24 months.

Southbank is located on the corner of Lake Kawana Boulevard and Mantra Esplanade in Birtinya and comprises 86 apartments with one, two and three-bedroom configurations, as well as four luxury sky homes, making it the largest RGD Project in Oceanside.

Mr Grabbe says the development is in the heart of what will become one of the most modern areas in the region, that offers a “walkable lifestyle”, with residents living within strolling distance of world-class medical facilities, cafes and restaurants, public transport, waterfront pathways, bike paths and the future Brisbane South Bank-style park and new town centre, which will be constructed by Stockland

“When you drive or walk around the health precinct, it feels like you are living in a city,” Mr Grabbe says.

“The new CBD in Maroochydore will be the same, but that is still years away. Bokarina is happening right now, and locals are only just starting to understand the value of the product here.

“What we are seeing is the number of local investors and end occupiers starting to creep up and that shows not only confidence in the area, but also confidence in our brand, which has been in the industry for 35 years.

“We have a strong vision for this area, we live here and we want to see it thrive.”

Sales and marketing manager Gail Hunter says with vacancy rates on the Sunshine Coast tightening, the region is experiencing one of the fastest population growth rates in Australia.

“With significant infrastructure projects just completed or underway nearby, Southbank at Oceanside is ideally positioned to realise great returns and lifestyle benefits for both investors and owner-occupiers. A large percentage of the tenants in our projects work in the hospitals,” she says.

There is no doubt the $2-billion investment in the Sunshine Coast University Hospital was the catalyst for this dramatic change, which Mayor Mark Jamieson says has become a showcase for what the future of the region looks like.

“This is a very popular area and we have been challenged by the anticipated population growth of another 200,000 people and we are also challenged by affordability and creating the careers of the future,” he says.

“One in five Sunshine Coast families are reliant on the development and construction sectors to put food on their tables every night, so projects like [Southbank] are vital to the region.

“I’d like to congratulate the RGD Group for having the tenacity and determination to carry on when others got the wobbles and to see how this precinct is developing is refreshing for us all.”

Stockland senior development manager Mark McMahon says the current development surrounding the Sunshine Coast Health Precinct is unlike anything the master developer has ever seen before.

Stockland has been a major player in the development of the health precinct and is currently working on Birtinya Island, Bokarina Beach and the Birtinya Stockland Town Centre.

“The Health Precinct is unique in the country and it’s not often you get to build and design a greenfield hospital and design and build everything around it. It’s something that hasn’t been done before,” he says.

“Stockland is so confident in this area that we are investing in more than just land, with the Birtinya Retirement village and starting construction of the Bokarina Shopping Centre, which is so desperately needed. We will also be looking at investing in apartments at Bokarina Beach.

“We have made unbelievable investment here and it shows our confidence. It is unreal to think that just four years ago, this place was just a paddock.”

Construction on the shopping centre is already underway, with major anchors Coles and Aldi confirmed.

Mr McMahon says while he cannot give too much away at this early stage, he can confirm the centre will be “unlike Stockland has ever done before in a shopping centre,” describing it as having a “Sunshine Coast Hamptons” feel.

Inside a $1.9 million Coast property
Home school is in