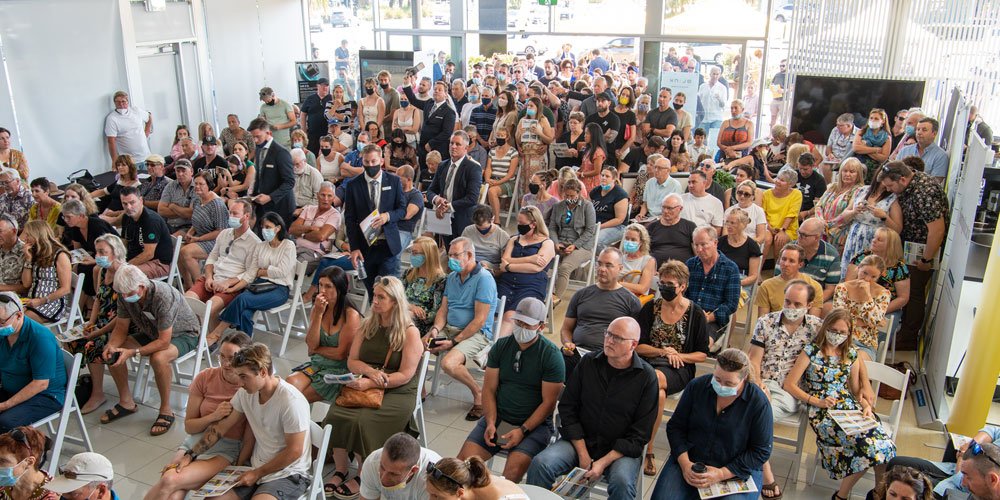 It was hotter inside than out on Sunday when Ray White’s mammoth The Auction Event offered up 70 Coast properties at Mercedes-Benz Sunshine Coast’s overflowing room of prospective owners and investors.

There was spirited bidding for all but a few properties. Those that drew the greatest action and heart rate raising bidding were houses. Many inched higher by just a $1000 while others flew up from the starting price towards the slam of the hammer.

A clearance rate of 71.4 per cent was achieved with 50 properties sold under the hammer achieving $42 million in sales. The remaining listed properties are now under negotiation.

Auctioneers Dan Sowden and James Goldsworthy’s first five sales set the scene for the rest of the long day. Top of the list was 4 Serenity Circuit, Maroochydore. It took 33 bids for the house to finally sell for $1.68 million. “That was almost $300,000 over the reserve,” Mr Sowden says.

The next three houses touched around the $1 million or more mark after between 10 and 21 bids.

The first of the apartments – 902/67 Sixth Avenue, Maroochydore – started at $1.7 million and finally closed, after late negotiations, for $2,280 million.

Across both houses and apartments, the agents were busy balancing both floor and phone bids.

“Up to half the bidding was over the phone with genuine interest from intra-state and interstate buyers,” Mr Sowden says.

Hungry phone bidders tried their best to secure 13 Janderra Street in Buderim. With its heated pool, fire pit and pristine reserve backdrop, it finally sold to a Coast resident who had bid on several properties before this one, finally beating the competition to secure his dream family home.

“We saw bidders today that registered today for up to eight properties,” Mr Sowden says. “If they missed their first choice, they had backup options available on the same day.”

It almost didn’t go all the way for local buyers with a couple from Lennox Heads staying the course over multiple bids to try their best to secure 601/59-75 Mooloolaba Esplanade in Mooloolaba, which ultimately sold to a Coast resident for $1.375 million.

“We believe this was the largest real estate day the Coast has ever seen,” Mr Sowden says. “Putting so many properties together in this market, which is quite a strong sellers market, made absolute sense.

“It also made sense for buyers who wanted to come to one venue, to one event to buy a property.”