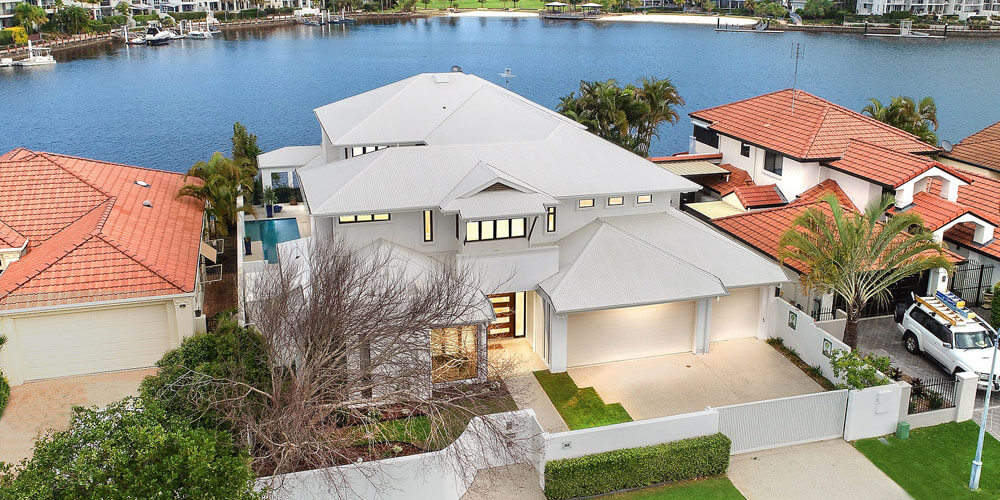 The prestige property market is in full swing across the Sunshine Coast, with waterfront canal homes and apartments or luxury properties with easy access to the beach continuing to attract high sales figures.

In a show of strength of the property market and the value the Sunshine Coast still represents to homeowners and investors, homes and apartments in the $2 million-plus price bracket continue to be snapped up, with demand remaining for more listings.

Next property Group’s Karen Jones says homeowners and developers are realising their waterfront properties have limitless potential if they were to create something spectacular on the land they own.

A great example of this is the Tangalooma residences at 63 River Esplanade in Mooloolaba.

“A local purchased the old ‘pink house’ through us in 2014 and created high end, luxurious residences. Nothing of this calibre has been seen on the Coast ever before and we have seen three of the prestige residences there sell for well over $5 million,” Ms Jones says.

“There has also been a $6 million-plus sale at the end of Mooloolah Drive, Minyama and a $5 million plus on Mooloolah Island. Sales at this level have been few and far between since the GFC, but our prime positioned properties are now hotly contested.”

Ms Jones says Alexandra Headland is in great demand at present, with high-end properties selling “in a matter of weeks”.

Mooloolaba, Minyama and Buddina are also desired hot spots as are beachside homes in Moffat and Dicky beaches.

“Buyers want the beach or water, which have always been highly sought after, but I think as the Coast grows, the percentage of these properties in the overall market will shrink, thereby making them more valuable,” Ms Jones says.

McGrath Estate Agents’ Geoff Ohmsen says he has seen high demand in Minyama, Mooloolaba and Yaroomba, with homes and apartments in the $1.2 million to $2 million range being quickly snapped up.

“Homes are generally more popular, but I have sold a few prestige apartments over $2 million this year to international clients,” he says.

“The Southern market (Sydney and Melbourne) is still attracted to the Sunshine Coast, but our locals are still giving them plenty of competition.

“There has been a slight increase in demand for finished homes, but the demand is still there for the blank canvas homes needing demolition. In the end, astute buyers will always pay slightly more for a well finished home that has a ‘wow’ factor.”

Ms Jones says there has also been a slight change in the demographic of interstate buyers.

“Previously when we have had a hot market, the majority of buyers moving here were retirees or soon to be retirees. I am selling many prestige homes to these buyers but also families with school age children. I have sold a Minyama waterfront for over $3 million to a family relocating from Tamworth, and many homes to families moving from Sydney and Melbourne,” she says.

“There is a mix of locals upgrading their properties to the best position they can afford and non-local buyers who are still seeing value in our prestige market.

“There is a real ‘buzz’ on the Coast this year, with all the development and infrastructure upgrading, locals and interstate buyers alike are excited again by our prestige properties.”