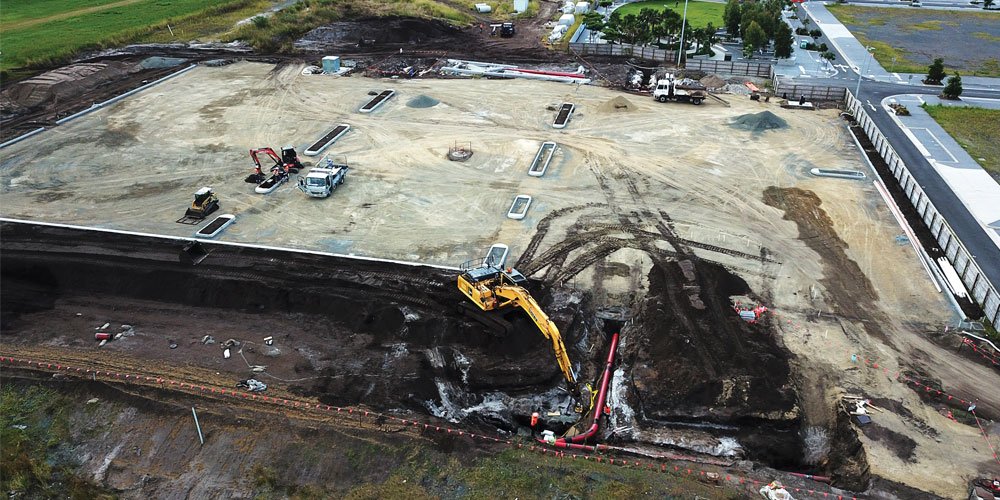 Construction of a new car park and connection of the innovative automated waste collection system in stage one of the new Maroochydore City Centre are nearing completion with the team from Hall Contracting powering through civil works.

“We’ve been blessed with some  great weather over the past few months and this has enabled our team to make great progress on the new car park as well as the connection of the automated waste collection system, which will be the first of its kind in Australia.

“We’ve also installed 150 metres  of kerb and channel as well as  conduits, pits and control boxes for  the electrical system,” Mr Busse says.

SunCentral Maroochydore CEO John Knaggs says the new carpark is an important interim step in advance of  the planned multi-deck car parks for the city centre. “This carpark will be a valuable addition to the early stages  of the project.

“Along with the with the on-street parking, the car park will serve the immediate needs of workers and visitors including those who may attend events on-site,” Mr Knaggs says.

Meanwhile, further south of the site, the Hall Contracting team is working  to connect the automated waste collection system to the transfer station building off Carnaby Street prior to commissioning of the system later this year.

“This has been a big job for our team. We have had a number of welding crews as well as a team of excavator, front-end loader, and water truck operators along with labourers working on this innovative project,” Mr Busse says.

“This is an Australian first project  of its type so we are proud to play our role in its installation. It’s certainly a  big job – we have completed 121 welds on the steel pipeline and 250 metres  of pipe has been trenched, lowered in with sections welded together and backfilled.”

The first commercial building in  the new Maroochydore City Centre, Foundation Place – which is being constructed by local builder Evans Built – recently completed its sixth level, which includes podium level car parks.  Just two levels remain to be built before the project is completed later this year.

Construction of Habitat’s Market Lane residences, Pro-invest’s Holiday  Inn Express hotel and Sunshine Coast Council’s nine-storey city hall building are all scheduled to commence at various stages before the end of the year.

Access to the fastest data connection to Asia from Australia’s eastern seaboard will also soon be possible with the recent connection of the international subsea cable into the new city centre via the cable landing station on Maud Street.