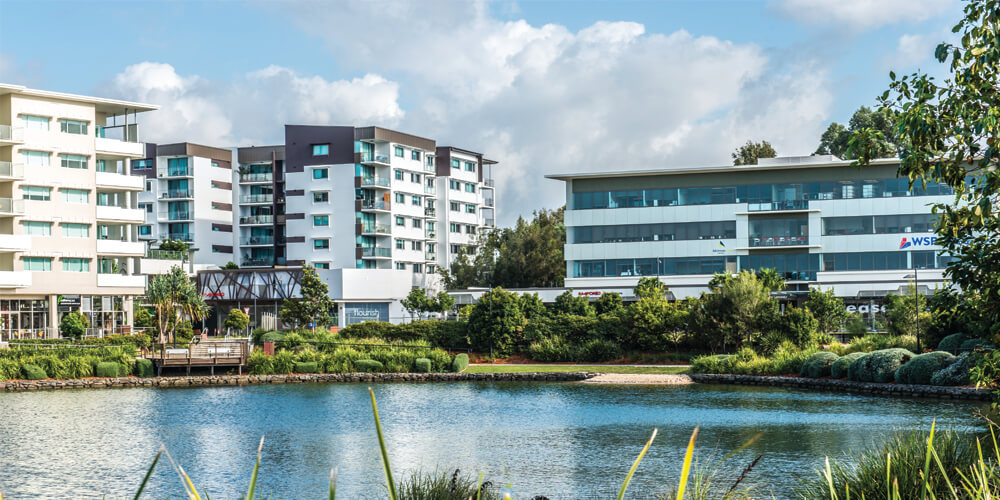 The Sunshine Coast property market is thriving thanks to the region’s population growth, job creation, infrastructure projects and our enviable lifestyle. Here, Coast property experts with decades of experience talk to My Weekly Preview about the temperature of the property industry and what is driving enquiries from buyers and amazing sales results.

Residential: off the richter
Next Property Group agent Craig Porter says the Sunshine Coast is continuing to grow in both population and reputation as a true lifestyle destination.

“What we are experiencing here on the Coast right now is to be expected,” he says.

“We are a market and destination that is maturing every day, yet we are still an infant when you consider our major cities and the demand on their housing markets.

“As a person that has been involved in the property market for the past 20 years and the past 17 years as an agent, we see a very diverse range of people coming from literally all over the world to share our lifestyle.

“The infrastructure boom that we are seeing on the Coast right now, with the $1.8-billion Sunshine Coast Public University Hospital, coupled with the $5-billion Caloundra South development, which by the way is the largest  master-planned community ever undertaken in Australia under single ownership, are all contributing to our growth and prosperity in many areas.”

Porter says this does not mean property prices will continue to rise at a rapid rate, but rather should insulate the region from the great price falls that are predicted in some areas of the country.

“My advice to any would-be seller in our market right now is just do it,” he says.

“When you sell in any market, whether good, bad or indifferent, you normally end up buying in that same market, hence one equals the other.

“Just be sure you get good advice from your agent, and please make sure you market your property properly and by this I mean maximising the potential amount of sellers that will be attracted to your property. There can really be some significant differences in your result in the end, and you only get one chance, so please do it properly and you will yield the rewards.”

“[Buyers] are looking for rural-residential properties that give them more space from the neighbours than they experience in more suburban areas,” she says.

“As Brisbane and the Sunshine Coast have become more populated and busier, buyers are opting for a quieter more relaxed lifestyle that the range offers, yet still close to all of their familiar facilities. In the past year we have seen a resurgence of buyers looking for a country weekender or holiday home and buyers are seeking properties with views.”

Tatton says a popular choice for buyers is something akin to 193–199 Western Avenue, in Montville.

The 1910 two-bedroom timber cottage on 1.1 hectares with a northern aspect was listed at $599,000 and the property generated substantial interest and sold within six days of listing to a young local family for $590,000.

Define Property Group principal and auctioneer Ross Cattle says he has seen changes and growth in the Mooloolaba market and surrounding suburbs that he never imagined seeing 20 years ago.

“I have been saying for some time now that the Sunshine Coast is finally stepping out of the shadows of Brisbane and the Gold Coast in terms of job sustainability and opportunities, our young people to be able to find good jobs when they leave school and the university is looking better than ever before, we are seeing good growth and I expect we will continue to see this well into the future,” he says.

“I think the majority of growth will come from the Sydneysiders who are fed up with their vast lifestyle difference and looking for a better life in our very unique culture and lifestyle. We will see people move here from other parts of the country and the world, but working at the coal face, our New South Wales neighbours are the ones I see most of.”

Cattle says the property market is strong and balanced and he anticipates steady growth for the foreseeable future.

“The strongest suburbs are always going to be the same suburbs, the locations that are close to the beach, waterfront or acreage properties within a quick drive to the beach and good schools. Living in beachside suburbs offers people a unique lifestyle, I see so many people immerse themselves into the local scene of early morning starts on the beach, they catch up with new friends for a wake-up coffee before starting their day, living beachside gives more family time for fun and leaving the car alone. This lifestyle comes at a price and it’s going to continue to cost more to become a part of it as we grow,” he says.

“An example of this is the owner-occupier rate rapidly changing in beachside suburbs that’s pushing investors and tenants further away from the beach, basically people are buying to live in and out-bidding investors.

“Our clearance rate is 99 per cent on beachside houses and time on market is very low, with many properties selling before they even get out to the general public, that’s our Mooloolaba and Alexandra Headland markets.”

In the premium residential markets, the past two years have seen the Sunshine Coast’s northern beaches suburbs such as Yaroomba Beachside Estate emerge as a sought-after residential destination, with buyers keen to become part of beachside living which boasts views of Mount Coolum.

“We all know that the Sunshine Coast is high on the national property radar and Yaroomba is holding its own due to easy access to the beach and convenient shopping options in the area,” Aldridge says.

The report revealed that in the 12 months ending June 2016, a total of 92 vacant lots of land were sold with prices reaching a ten-year average high of $755,000.

Solid growth has been achieved across the residential sector including nine per cent per annum growth in apartments while house prices grew by nearly eight per cent.

Aldridge says enquiries for the first quarter of this year have continued to remain solid with second and third home owners particularly keen to relocate to Beachside Estate.

“Much of the interest has indicated a strong preference to live closer to the beach and amongst nature, but we’re also hearing from buyers who want easier access to the soon to be expanded airport. However, the resale market for vacant land recorded some great results for buyers,” he says.

One story involves a couple who decided to sell their 418-metres-squared lot within the Bella Mare precinct at Sekisui House’s Beachside Estate after receiving an offer of $535,000 for the lot they bought for $380,000 in August 2015.

Development: it’s all happening
The Sunshine Coast is currently one of the strongest performing regions in Queensland, with projects like the new Sunshine Coast University Hospital, SunCentral Maroochydore and the airport expansion strengthening economic development and job growth in the area.

AVID Property Group general manager Bruce Harper says this, and the proximity of amenities, like the University of the Sunshine Coast, the new Kawana healthcare precinct and shopping precincts at Sippy Downs and Kawana were huge deciding factors when they found the site at Palmview for the new community, Harmony.

“Through previous experience, we have found that building a community around established amenities is critical to attracting future residents. This has proven to be consistent at Harmony, where we’ve seen record enquiries of more than 300 per month since our first land release in November 2016,” he says.

“We have more than doubled sales targets, resulting in the need to fast-track future releases, with the second land release planned for April.”

Harper says open space is a key driving factor for buyers, so more than 35 per cent of the Harmony site is dedicated to green open space and 90 per cent of residents will be within 250 metres of a park when the project is complete.

“We’re also very proud that Harmony will be home to Queensland’s first grand linear park, spanning more than five hectares and running the length of 10 football fields. The park will feature a 60-kilometre network of pedestrian path and cycleways, and key activation areas to cater to a variety of social and recreational needs of our buyers.”

“The increase in land prices has driven the demand for small affordable lots around $250,000 with 12-metre frontages. While families are still seeking large homes, there has been a move to more compact, functional outdoor spaces, as people make use of community spaces, like the grand linear park, for recreation.”

Commercial: opportunities abound
It’s not just lifestyle that appeals to Youi or other rapidly expanding brands, such as Jetts Fitness, that have chosen the Sunshine Coast for their global base.

It is the fact that the Coast offers lower operating costs that has seen continued strong demand for office space, while vacancy rates in Brisbane CBD are still hovering above 15 per cent.

The future Maroochydore CBD is also attracting more interest in the region, particularly from business owners and those who want to relocate to the Coast to launch a startup.

SunCentral CEO John Knaggs says the Coast is now widely recognised as a “growing economic powerhouse and property hotspot, and Australia’s business community is clearly backing the vision for the new Maroochydore CBD.”

Sunshine Cove Realty’s Penny Service credits the transport link between the Sunshine Motorway and Maroochy Boulevard with “an immediate surge” in commercial development along that three-kilometre stretch.

“A major part of Sunshine Cove was to provide the new entry into the Maroochy CBD precinct,” she says.

“This significant road corridor is designed to read as a green boulevard starting at the interchange with the Sunshine Motorway. The boulevard in turn became the focus for a range of showroom uses, all of which have been controlled by the Chardan Development Group to present a high standard of built form including luxury new car dealerships; an extensive Harvey Norman based homemaker centre, and office and retail uses adjoining the Sunshine Plaza Shopping Centre.”

The Cove’s Flinders Precinct, currently under construction, is a dual use precinct of residential and boutique office and showroom properties.

“As Sunshine Cove grows to deliver more of its mixed use components, levels of activity will continue to grow. With development of the CBD, the precinct will be visited more and more by a growing population. Thus it has been designed to become a very diverse, very active precinct that integrates well with the future form of Maroochydore,” Service says.

Sunshine Cove has grown to a community of around 3000 residents across six finished precincts and the seventh,  Claremont, will soon be released.

“Within each residential precinct, character has been developed through detailed control of streetscapes, the placement of different types of housing to balance density with planting, and referencing views to key site features,” Service says.

Continue Reading
You may also like...
Related Topics: Development, Growth

Fear not: Auctions are a good way to go
An eye for style