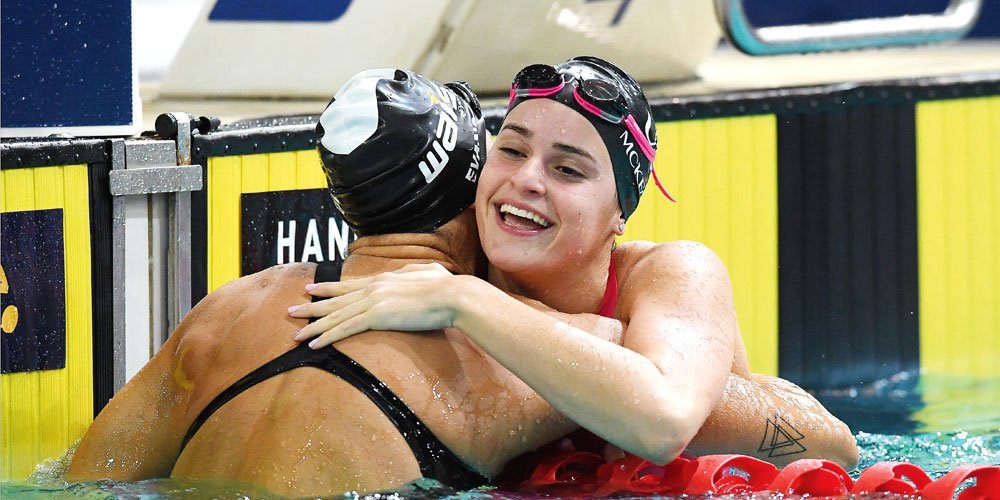 The 19-year-old finished her 100m backstroke in a time of 58.11 seconds to become the world’s fourth fastest women to ever swim in the event.

“Our whole team while racing down there were doing personal bests left, right and centre,” McKeown says.

McKeown was far from finished, in her next event becoming the third fastest swimmer over the 200m backstroke by clocking 2:04.49.

The 1.34 second personal best not only beat the Australian record but the Oceania and Commonwealth records.

Those previous records were also held by Seebohm who had a time of 2:05.68.

“I felt like I had a pretty decent chance of putting up a PB after warming up in my 100m backstroke but I never guessed I’d knock almost 1.5 seconds of my best.” McKeown says.

The multi-stroke swimmer also managed to set a new a new personal best in the 50m butterfly.

Despite the huge efforts, McKeown isn’t slowing down.

She is building towards qualifying for the rescheduled Tokyo Olympics.

“I like to keep myself level-headed and I don’t get too ahead of myself,” she says.

“It definitely helped me with my race processes and knowing what to do and what not to do.

“Myself and other teammates all have a plan to be faster than what we were this January so I think to be ticking off the boxes towards that is something that we’ve all been striving to do.”

Coach Chris Mooney was more than pleased with McKeown’s efforts but stressed there was still plenty of work to be done.

“It’s great that we swum fast and broke some records but we’ve got a little bit of work to do yet. She knows what the best in the world are doing and if we want to be the best in the world, those skills needed to improve and they have improved but we’ve still got improvement in us,” says coach Mooney, first speaking to Swimming World Magazine.

“Of course we are happy and we will celebrate a great swim, but we know we’ve still got a lot of work to do but we are just happy that what we are doing is working in a way that can produce a result like that.”

Mooney credited McKeown’s speed to the success of the program in place.

“Through the whole COVID period everyone was faced with new challenges and to see the dynamic of the team stick together and deal with that whole bizarre situation we found ourselves in (is great),” he says.

“At the moment we’re using the words ‘we’ and ‘us’ more so than ‘I’ and the program and the athletes in the team are really producing some fantastic results
at training.”