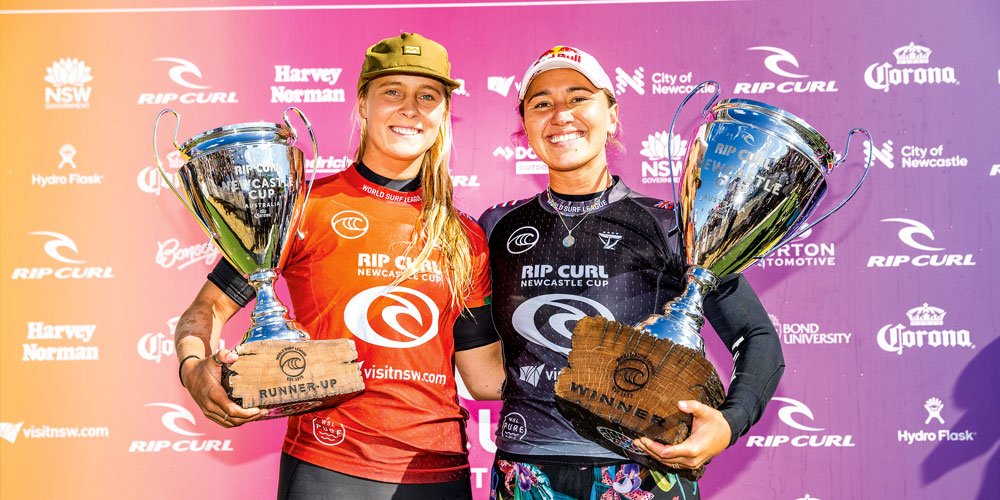 Three little-known surfers including two Sunshine Coast locals and seven-time world champion Stephanie Gilmore flew the flag for Australia in the finals of the Newcastle Cup after another day of drama and big-name wipe-outs at the world surf tour event.

Coolum’s Isabella Nichols and Mooloolaba’s Keely Andrew had amazing performances that teed up an all-Sunshine-Coast semi-final.

Tour rookie Nichols would be the victor and go on to surf for her first ever CT win against four-time World Champion Carissa Moore.

Unable to come away with the victory, Nichols reflected on her best result to date.

“There’s been so many highs over the last couple of weeks and to be able to surf against my heroes like Steph (Gilmore) and Carissa (Moore) and all the girls that just were absolutely ripping is awesome.”

“Newcastle has a special place in my heart, it’s one of my favourite places in the world and to be able to have my parents here and my support crew its amazing. It’s just surreal.”

Nichols, who eliminated world number three Tatiana Weston-Webb in her round of 16 heat, met Gilmore in the first quarter-final after the Olympic bound surfer took down Central Coast youngster Macy Callaghan in their battle.

“I’m pretty speechless at the moment, to be honest,” Nichols says after winning the heat. “Steph is my idol, she always has been, always will be. She was the first person I looked up to and I still do. Having a heat against her was pretty surreal.”

The event full of upsets has changed the look of the women’s tour rankings, with Moore overtaking Tyler Wright to reclaim the number one spot.

Isabella Nichols moves into third and fellow Coast local Andrews is now in 11th position heading into the third event for the year at Narrabeen. The Rip Curl Narrabeen Classic presented begins April 16.