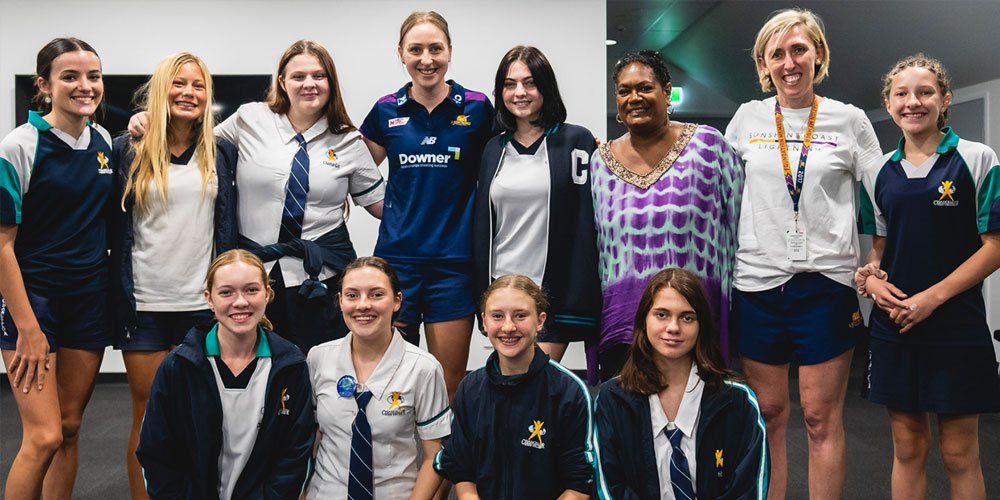 The club has successfully run Confident Girls Foundation programs and clinics in various formats across the past four seasons, aimed at promoting healthy living and building resilience in disadvantaged youth communities.

“We’re hoping to expose them to what we do at Lightning and hope they can in return help educate us on who they are and where they – and their ancestors – have come from.”

Unie says that while the Confident Girls Foundation is centred around empowering young women, the program has also been personally rewarding and informative. “The inspiration goes both ways,” Unie adds.

“We do what we do here at Lightning and the girls are forging their own paths across the road (attending Chancellor State College). It’s nice to bring those two worlds together and see what magic we can create.”

Sessions included a yarning circle, netball skills, cultural learnings, as well as engaging Aunty Bridgette and Aunty Kaylene to speak from their own experiences and background.

The participants also took part in an artwork session to create traditional painted nulla nullas used as part of Lightning’s gift exchange with Queensland Firebirds and Adelaide Thunderbirds during Indigenous Round.

Throughout it all themes around identity began to emerge.

“What we discussed in our first group together was powerful women in our lives and why they are powerful,” she said.

“We wanted to see how we could replicate that in our own lives, so that has been a theme.”

“There’s a bit of reflection in the sessions.”