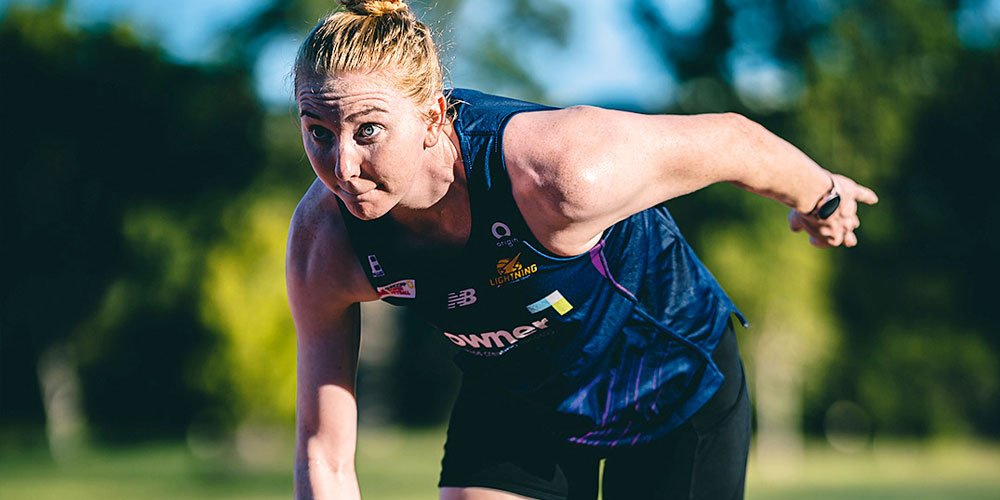 A condensed training group is keeping athletes accountable on court and in the gym during pre-season, and Sunshine Coast Lightning’s Maddy McAuliffe believes the team will only benefit.

With internationals Karla Pretorius and Phumza Maweni in South Africa until next month and Cara Koenen undertaking Origin Diamond duties, Lightning is down to seven senior athletes plus training partners. All eyes are on the core group who remain at Lightning headquarters and Ms McAuliffe says it has become a motivating factor at each training session.

“I honestly think as a group we’ve been performing really well; we’ve been putting in a lot of hours in the gym and on the track,” she says.

“I think having that tight group means that everyone has to step up; there’s no hiding at the moment.”

Next Thursday, Lightning will take to the court in their first competitive hit-out for 2021, providing the opportunity to gauge how new combinations are forming.

The midcourt will be an area of focus, given Ms McAuliffe, Laura Scherian and new additions Mahalia Cassidy and Ashlee Unie will all be available for court time.

The absence of former Captain Laura Langman has been widely spoken about externally, but Ms McAuliffe is confident the new-look midcourt will be up to the task. “Obviously there is some change this year with Lauz leaving the team, but Shez and I have been together in 2017 with Lauz in the team and then 2018 without,” McAuliffe says.

“We are used to that different midcourt and how that moves around. I think Mahalia has come into the team really, really well and we are lucky to have Ash Unie stepping up from training partner.

Ms Scherian also has confidence in the alternate line-up and says the injection of fresh talent will provide a competitive advantage. “I think we are all quite dynamic through the midcourt. I am hoping to be a bit more versatile,” she says.

“It’s been great to have some new ideas from the girls and we are really enjoying the opportunity to work with some new players.”