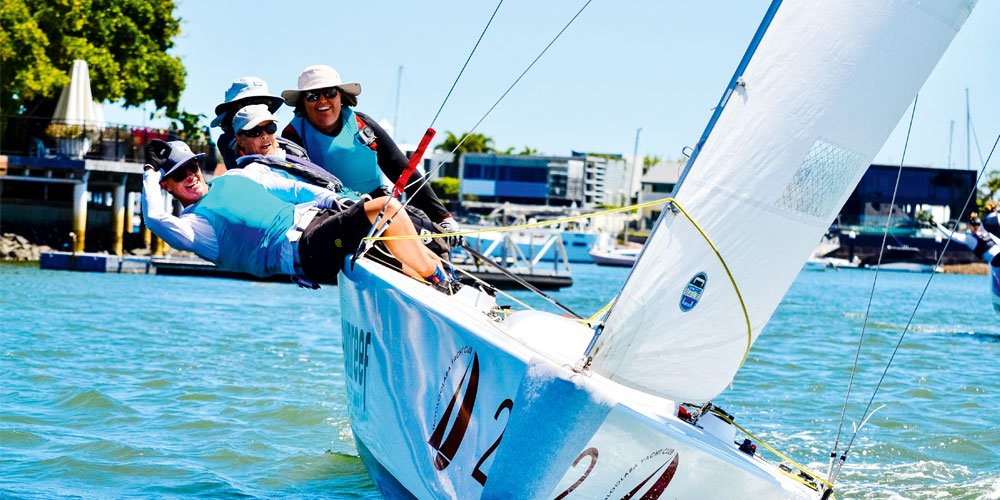 The Mooloolaba Women’s Keelboat Regatta held over the October 31–November 1 weekend, ran the gamut of challenging conditions on the Mooloolah River, from near glass-out to 25 knots, strong tidal flow and a super-tight windward-leeward course dictated by the northerly winds and the geography of
the river.

With the regatta’s objective of promoting pathways for women to develop their skills in the traditionally male-dominated sport of sailing, competitors ranged from Australia’s sailing elite to relative newcomers, with teams from as far away as South Australia and Brisbane.

Eight teams of three or four sailors competed on the Mooloolaba Yacht Club’s fleet of Olympic class one-design Elliott 6 keelboats, with each yacht completing up to nine short-course races over the two-day event.

Ahead of the super-cell storms that battered parts of the Sunshine Coast on Saturday, the racing was held in changeable winds that built throughout the afternoon to the point where racing had to be postponed.

“Several times as the wind strength reached the limit for the Elliott 6s, I considered stopping the race but the teams on the course managed the conditions exceptionally well,” says race officer, Warren Myles. “I haven’t seen such quality seamanship in a while.”

Sunday’s sailing couldn’t have been more of a contrast, with the start delayed due to lack of wind. However, the northerlies filled in to provide champagne sailing conditions and the full complement of races was completed.

“The regatta demonstrated the enormous potential for increasing women’s participation in sailing, and Mooloolaba Yacht Club is hugely supportive of that goal,” says Tanya Kelly, MYC Commodore and skipper of team Boom Shakalaka.

“We saw excellent capability in boat handling and a great competitive spirit, but it was also great to see the collaboration amongst the different teams, with the experienced sailors welcoming and supporting those newer to the sport.”

The regatta has grown from the club’s Women’s Skills Development Program, which has seen over 100 women sign up for sailing at the club since the program’s inception in 2017.

This was the second Mooloolaba Women’s Keelboat Regatta and the 2021 event is planned for late June, by which time border restrictions may once again enable other interstate teams to compete.

“In these difficult times, it was fantastic to be able to come together and have some ‘normality’,” says Mr Myles.

“It’s no wonder the Australian Olympic Laser team has chosen Mooloolaba as their training ground it’s the best place in the world to sail.”

The regatta was run in association with SheSails Australia and sponsored by Next Property Group and Helly Hansen.