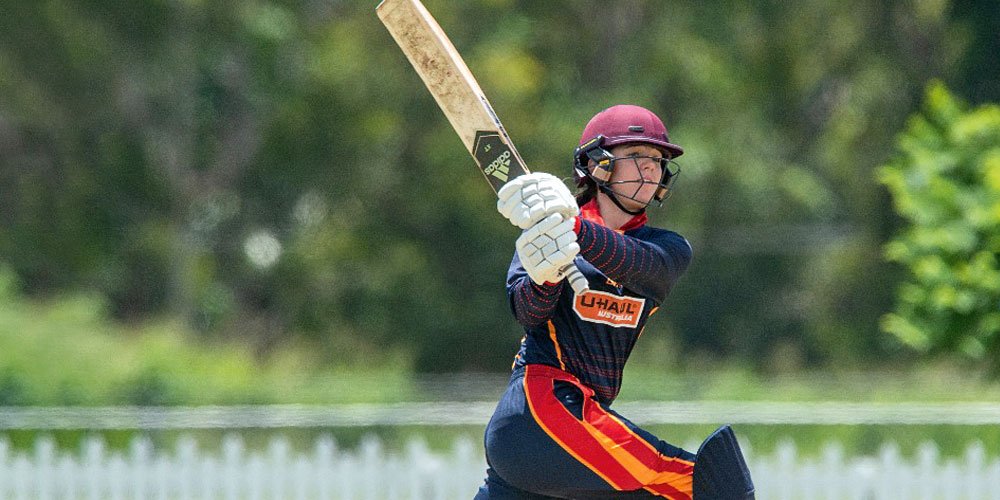 At just 14, Lucy Hamilton is thriving on Queensland’s biggest cricket stage. The young bowling all-rounder showed her potential in the state premier grade this season, starring during the Sunshine Coast’s grand final win over Gold Coast at Robina.

The Scorchers did not boast Queensland representative players, but they did have a group of determined and talented up-and-comers in their maiden season, including Lucy.

“It was a good effort by the girls,” she says.

“We had great support and it was really enjoyable.”

Lucy was player-of-the-grand-final with an unbeaten knock of 57, which helped the Scorchers reel in their target of 178.

“I really enjoyed how it was a big team effort,” she says.

“We started off the season just trying to develop, and I found it really exciting to play in the semi and the final.”

Lucy became more determined and devoted as the season wore on.

“It was good just to get the opportunity to play, especially with all the coaching and support staff and my family and everyone around me.”

“They all encouraged me, and I was always in the cricket nets, hitting balls every afternoon.

“I found my dedication grew and I really started enjoying my cricket and the performances kept coming.”

Those who have watched her play this season say she is a natural talent and she has a bright future.

“My goal is to play at a high level of cricket when I’m older and hopefully just continue and keep going in my career,” she says.

She was an opener for the Scorchers, before being utilised at number five.

“A lot of people call me a bowling allrounder, but this year I really wanted to work on my batting,” she says.

“And to get 57 in the grand final made me feel like I really accomplished something this year with my batting.”

“I just had the confidence to play the right shot and back my ability,” she says.

She hit the ball well at training, and it transferred to matches.

“It was (about) having the focus to do it in the game,” she says.

“(Previously) I would do a silly shot and get caught or something but this year I really tried to focus and keep my head down and work hard.”

Lucy commuted from Bundaberg to play with the Scorchers in games around South East Queensland every Sunday during the season, after playing for her local team Across The Waves on Saturdays.

She started playing cricket when she was seven and fashioned many of her skills in the backyard with her two older brothers.

She was asked to fill in on a Sunshine Coast under-15 team a few years ago and her development went from there.

Lucy helped the Scorchers during their successful run in the state second grade, before making the transition with them to first grade in 2020/2021.

The Year 9 student juggles cricket with her studies.

“My school (Shalom Catholic College) has a high-performance sports program that I am in, so I get to drop an elective and go to the library to study and catch up on all my work.”

“I found that was good because I’ve got time to balance my schoolwork and sport.”

Touch Football Championship to stay on Coast
Fun and games