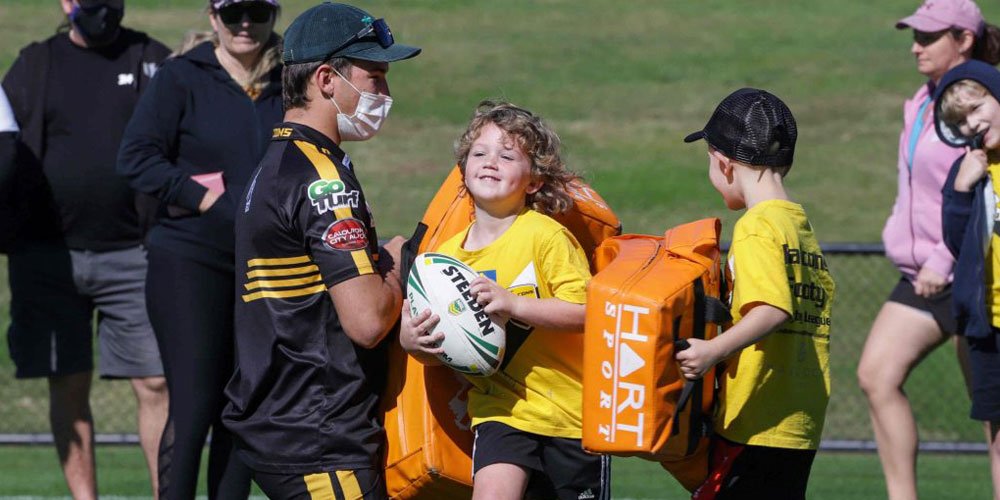 An award-winning program is continuing to change the lives of Sunshine Coast kids living with challenges through the fun of rugby league.

The children train and play modified rugby league and develop social and motor skills with the help of qualified coaches, in a safe and supportive environment at Sunshine Coast Stadium.

Falcons CEO Chris Flannery says the initiative provides the kids and their families with great opportunities.

“It’s really for kids who can’t play in a mainstream sports team,” he says.

“We found there were a lot of kids who wanted to play sport but couldn’t play on Saturday mornings with other kids.

“So, we decided to start the program … and we found the kids enjoyed it.

“It’s also provided the parents with a chance to network with others who are in a similar position to them with kids with different abilities.”

The youngsters, aged five to 16, enjoy one-hour sessions before Falcons’ home games during the football season.

They are split into groups, depending on their abilities, and take part in non-contact skills drills and games focused on rugby league.

They are supported by Falcons’ players, coaches and staff, while former Brisbane Broncos and Queensland State of Origin star Matt Gillett is the program’s ambassador.

The Falcons will play their next home game at Sunshine Coast Stadium against the Brisbane Tigers for round eight of the Hostplus Cup on May 15.

To coincide with the home game, the club is having a Falcons membership drive at the stadium between midday and 2.30pm. Head to the Falcons marquee.

Keep up to date with the Falcons at scfalcons.com.au.