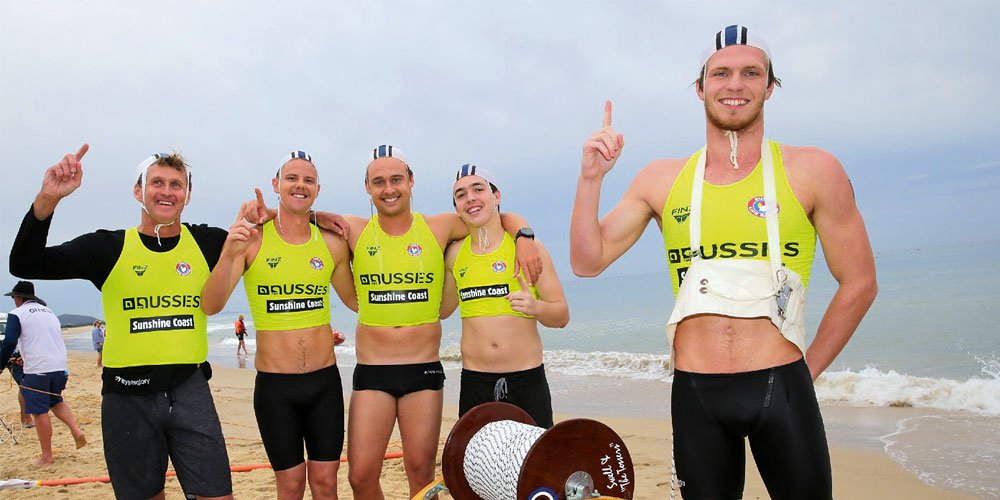 Maroochydore club member Hayden Cotter gave the crowd something to cheer about at The Aussies last Thursday, with a blistering performance in the open belt race.

Competing on his home beach, the renowned swimmer made the most of the relatively calm surf conditions to propel his team to victory. Other team members were John Baxter, Matthew Palmer, Daniel Peacock and Ethan Irvine.

They finished ahead of Northcliffe and Alexandra Headland.

“It’s pretty flat out there, so you know it’s going to be a fast race from the start, with everyone even altogether. I just got a good start, and just went max from then on,” he says.

“I went really hard to half way, knowing that you’ve got a lot of speed in this field. I was hurting when I got close to the can, but I didn’t really want to think about it until you get your hand over the can. You know you can relax then.

“It’s good to get a win, especially on the home beach, it just makes it that much better. I know we’ve got a good history of belt races as well, so it’s good to have a few of them around like Jason O’Pray and Danny (Short) on the beach as well.”

Jenaya was thrilled to be racing in front of friends and family.

“It’s pretty cool to be on my home beach, and doing a mixed double ski race with my dad,” she says.

The event was won by Northcliffe’s Mackenzie Hynard and Danielle McKenzie. Alexandra Headland duo Tayla Halliday and Emma Woods claimed gold in the under-19 female board rescue.

Patrol team celebration
Mooloolaba club members celebrated after winning gold in the under-17 patrol team competition for the first time. Regarded as one of the most challenging events at The Aussies, the competition went for more than 10 hours. Participants competed in multiple disciplines of surf life saving for the event, which is designed to showcase skills associated with patrol work. The event includes a theory paper, physical events (surf teams, board tube-rescue relay), a team resuscitation, patient assessment and a life-saving scenario. The team consisted of Rylee Jones, 15, Hayden Notley, 16, Connor Dick, 16 and Kiera Bascombe, 15.