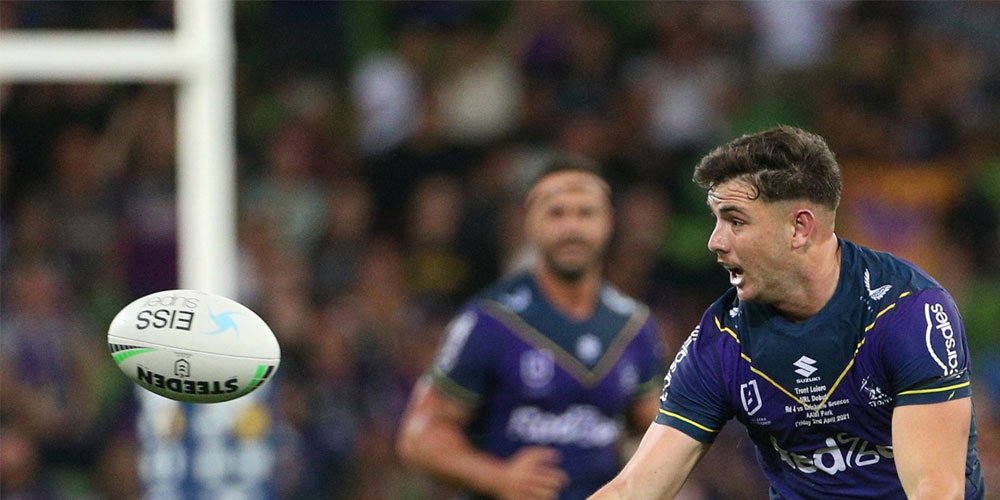 Young forward Trent Loiero was firmly on Craig Bellamy’s radar during the pre-season. The head coach would often mention – in both casual conversation around the club and when fronting the media – that the 20-year-old from the Sunshine Coast was a standout on the training track over the summer.

The 20-year-old from the Sunshine Coast made his NRL debut for Storm in round four this season against the Brisbane Broncos.

His impressive 18-minute stint off the bench justified Bellamy’s confidence in him and earned him another call up in round 11 and consecutive NRL games in rounds 13 and 14.

Loiero has been part of the club’s development squad for the past two seasons and was upgraded to Storm’s NRL top 30 squad this month.

A junior with the Kawana Dolphins club, Loiero progressed to the Sunshine Coast Falcons under-18 and under-21 teams before making his Intrust Super Cup debut in 2019.

“The thing that excited me most about moving down to Melbourne initially was getting to train full-time with blokes that I grew up watching and idolising as a young kid,” says Loiero.

“I have learnt so much from so many of the boys but someone I look up to is Nicho (Hynes), considering his journey and where he’s come from.

“I moved in with him and a couple of the other boys when I first moved down, and he took me under his wing and taught me heaps.

“Kenny and Felise are always helping me and giving me pointers at training too.

“Stephen Kearney has been huge for me this year; we get together each week and talk about things – what I’m doing good or bad and what I should be focusing on for each game and training session.”

General manager football with the Storm, Frank Ponissi, says the footy department has earmarked Loiero as a long-term NRL player for Storm.

“He’s a pleasure to have at our a club – a hard worker and quick learner who is very popular among his teammates,” Ponissi says.

“Trent is also another great example of the pathways that exist with our feeder clubs in Queensland, with seven players from the Falcons alone making their
NRL debuts for Storm over the past two seasons.”    – Melbourne Storm

Continue Reading
You may also like...
Related Topics: Melbourne Storm