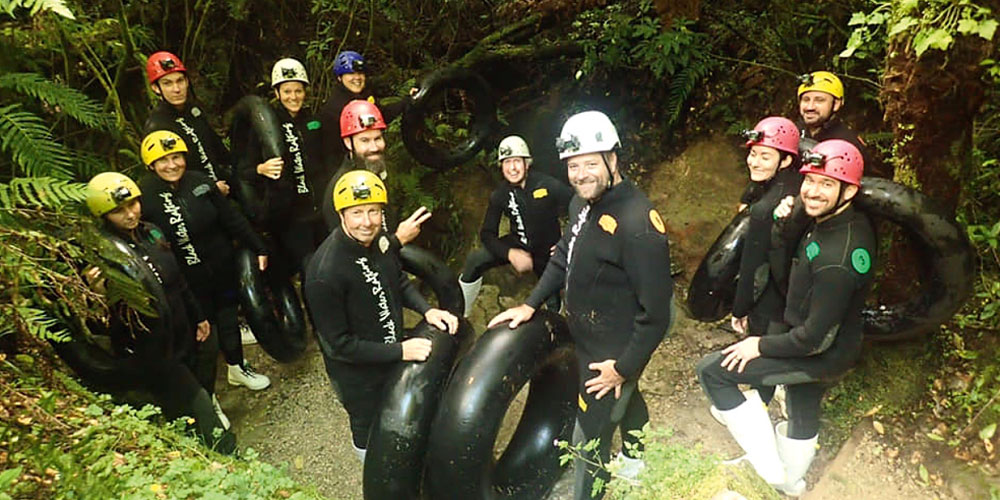 Gary, Sam, Connor and Eilish McCarty join Chris Rawlins and the rest of the tour group to take on the Black Labyrinth.

I never would have thought staring at the rear end of a moth pupa would be a magical way to spend a morning, but when you venture into the town of Waitomo, it is the thing to do.

Glowworms and the caves they reside in are the major drawcards to the otherwise sleepy rural town in New Zealand’s north island. And there is nothing more magical than taking in the beauty of thousands upon thousands of little glowworms spread out across the roof of a cave, reminiscent of a clear and crisp starry night sky. The Waitomo caves entice young and old, adventurous and not-so adventurous, able bodied and physically challenged. There is a cave experience that can be matched to any person.

Travelling throughout the north island with a party that included adults, teenagers and children, it was a challenge to find daily activities that would engage everyone, but this was not an issue when we reached Waitomo.

The majority of the grown-ups embarked on the thrilling Black Labyrinth tour in the belly of Ruakuri Cave while the two kids and I walked above them, exploring the intricate cave system of limestone stalactites, stalagmites and spotting glowworms.

For Black Labyrinth you don a wetsuit (a must for these chilly underground waters) and grab a rubber tube to experience the rush of floating at pace with the underwater current in complete darkness through caves adorned with luminescent glowworms.

This might seem a little too relaxing for an exploration tour, so they throw in some sections where you take a leap of faith, backwards off underground waterfalls.

Those wanting to step it up even further can take on the Black Abyss, which is the ultimate cave tour that also includes a 35-metre abseil into Ruakuri Cave’s tomo (hole), an underground flying fox and waterfall climbs.

My experience was much more leisurely. With the kids in tow, we first walked through lush native forest and took a short stroll through an underground cave system with a guided tour. We boarded a boat – the climax of the tour – for a silent, yet awe-inspiring journey under a glowworm ‘sky’.

As the rest of the family were still underground by the time we resurfaced, we had time to venture on to Ruakuri, the longest cave in Waitomo. It is also the only wheelchair accessible cave in the southern hemisphere, with a grand spiral ramp winding deep into the earth making for a majestic and surreal entrance. We were even able to glimpse a group of explorers on the Labyrinth tour as they navigated the waterways below us.

Above ground there are many walking tracks scattered around the hills that allow you to experience glowworms in the open air. Waitomo is a peaceful town to stay for a few days – one of those rare places that combines adventure and excitement with the ability to connect with nature in all of its glory.

Black Abyss
The most comprehensive caving experience with an underground flying fox and waterfall climbs. Experienced, trained guides will take you safely through the stunning underworld

Black Labyrinth
Float down the underground river in rubber tubes while admiring the glowworm displays above. Jump into cascading underground waterfalls.

For the less adventurous

Ruakuri
This cave is now an amazing example of engineering and natural cave structure.

Aranui
Aranui Cave has a natural cave entrance and is the smallest and most delicate of Waitomo’s three main caves.

Waitomo
The Waitomo Glowworm Caves tours are made up of two levels. The upper is dry and decorated with delicate formations. The lower level consists of stream passages, glowworms and the tallest chamber in the cave.

A dose of city style
The wonder of whales up close