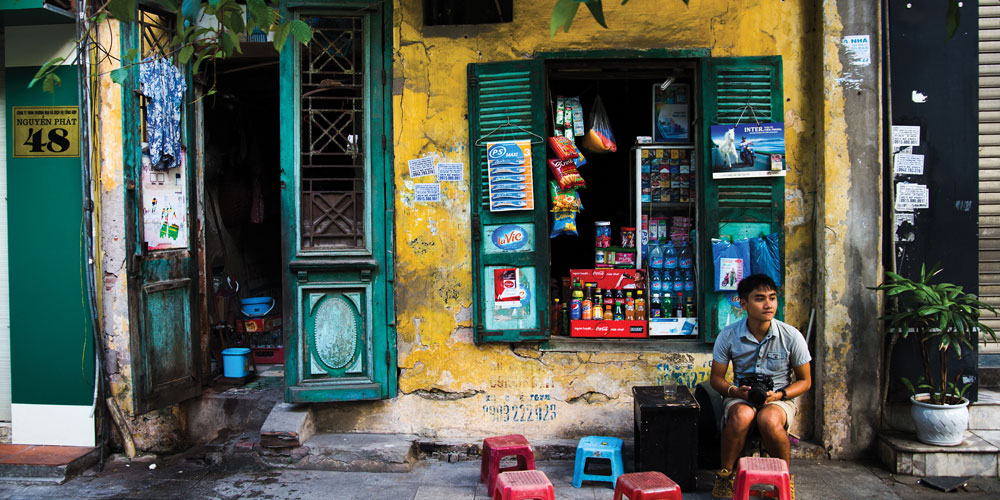 “Dawn bleeds with the people here and morning skies are red. As young girls load up bicycles with flowers for the dead.”

American singer-songwriter and anti-war campaigner Joan Baez wrote these words in Hanoi in December 1972 as American B52s pounded the Vietnamese capital with 20,000 tonnes of explosives.

Huddled with petrified locals in a bunker underneath the capital’s Grand Hotel Metropole, Baez recorded her song, Where Are You Now, My Son?

As I stand in the dark, concrete confines under the hotel, I try to imagine those long, loud nights almost half a century ago. Up to 40 terrified people bundled together in here, listening to Baez singing.

I’m struck by the lack of malice towards the US by our local guide and the Vietnamese in general. They look back in peace but are far more focused on the future.

At times, the hotel has housed Vietnam’s invaders; since opening in 1901, it has been under French, Japanese and Chinese occupation. Since the end of the ‘American War’, it has been a haven of luxury and peace.

Just weeks before I arrived in June, the hotel welcomed President Donald Trump and North Korean Chairman Kim Jong-un for a two-day summit (their entree, foie gras apple compote, is still on the menu).

Renovated in 2009, the Metropole still revels in old-world elegance. It still serves up fine French food in Le Beaulieu restaurant, as well as Vietnamese fare in Spices Garden and Italian in Angelina.

A melange of travellers, locals and guests sip cocktails at the poolside Bamboo Bar, or chat over coffee on the Terrasse under spinning bamboo ceiling fans whipping up the humid air.

In the cosy salon de conversation, they relax on comfy sofas with a whisky or book in hand. The design is classic French, with touches of Vietnamese style. Much like Hanoi itself.

The Metropole is nestled in the city’s Old Quarter, where bakeries serve up baguettes and croissants, the locals love a good coffee, and narrow buildings with long, shuttered windows open up onto elegant balconies.

Hanoi became the capital of French Indochina one year after the Metropole opened. In 1905, there were around 2660 French civilians living in the city.

But Vietnam has long reconquered Hanoi, its frenzied streets roaring with motorbikes seeming to make up time previously wasted to war. The Communists may still be in charge, but the country’s economy is resolutely capitalist.

Hanoi has always been a hub for travellers too, passing through on their way to Halong Bay. Designated a World Heritage Site in 1994, Halong Bay is northern Vietnam’s number one tourist destination: 1550 square kilometres of emerald waters housing close to 2000 towering limestone pillars and tiny islets, topped with thick jungle.

While the Metropole now offers a five-star sanctuary from bustling Hanoi, Halong Bay seems to present a peaceful escape from daily life.

I stand in the sun on the deck of Paradise Luxury run by Paradise Cruises, the most decadent fleet in the bay, and breathe out as we drift past lush islands dotted with wave- and wind-eroded grottoes.

Despite its beauty, this place is suffering from its own form of colonisation. Every day over 5000 tourists cruise through Halong Bay.

During our two days in the bay we visit Tung Sau Pearl Farm and Sung Sot Cave, and hike up the hill of Soi Sim Island to enjoy panoramic views of Halong Bay before taking a dip in its warm waters.

From my ocean bath I gaze at the immense limestone domes. They’ve stood for millions of years, their grandeur making Vietnam’s long list of invasions seem petty.

But each conqueror of this enticing country has left its mark, just as tourists do today, in ways good and bad. And all these layers of influence seem only to have strengthened the Vietnamese with resilience, ambition and pride.

The writer was a guest of Jetstar, Sofitel Legend Metropole Hanoi and Paradise Cruises.

Jetstar operates three flights per week between Sydney and Ho Chi Minh City, from $279 one way (conditions apply). Jetstar Pacific operates domestic flights within Vietnam, with flights from HCMC to Hanoi taking just over two hours. For more info, jetstar.com. Halong Bay is around 100 kilometres from Hanoi or two and a half hours by car.

Sofitel Legend Metropole Hanoi has rooms starting from around $385 per night. Visit sofitel-legend-metropole-hanoi.com/

Paradise Cruises offers a night aboard Paradise Luxury in Halong Bay from $770 for flexible rate and $487 for early bird booking (meals and activities included). For more info, paradisecruise.com.

Continue Reading
You may also like...
Related Topics: Hanoi, Vietnam