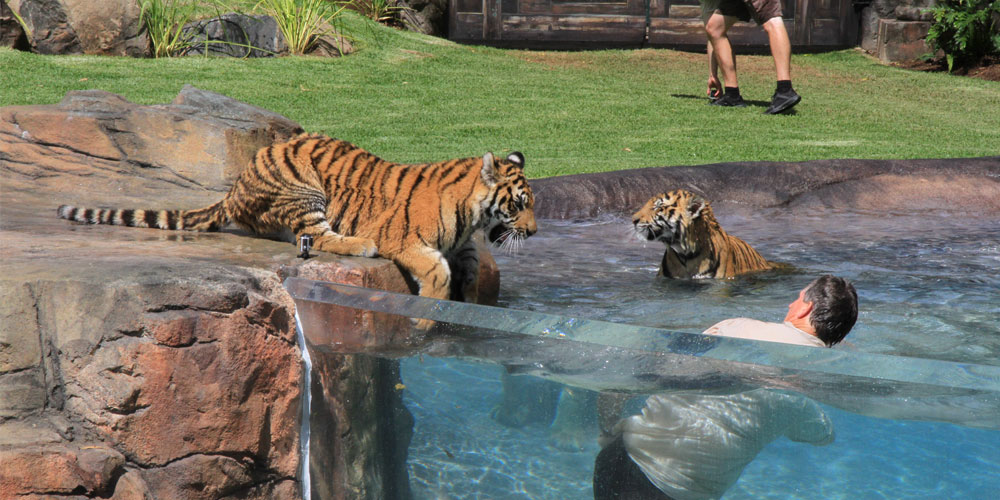 It has easily been a decade since I last set foot in the magical realm of Dreamworld on the Gold Coast.

I have so many memories of a younger and more adventurous version of myself heading to the theme park and spending an adrenaline-filled day with friends, daring each other to go on the biggest and most nail-biting rides.

To this day, I feel like I get another grey hair every time I think about sitting atop the 119-metre-high Giant Drop and hanging there for what felt like hours waiting with dreaded anticipation for them to put me out of my misery and send us towards the ground in stomach-flipping terror.

A number of hugely impressive thrill rides have joined the Giant Drop since then, including the ominous-sounding BuzzSaw and The Claw, but it was a very different side of Dreamworld that I saw when I recently headed back to this stomping ground of my youth with my husband and two children.

Wide-eyed and full of awe, the kids were in their version of heaven as we walked through the entrance gates to be greeted with a huge fountain and the cutest little baby tiger cubs laying around on leads with their keepers.

Squeals of delight erupted from my eldest and I immediately knew the day was going to be epic. Shunning a map and any semblance of a game plan for the day (most parents would agree planning is just a recipe for disaster) we asked the kids which way they wanted to go.

We ventured into ABC Kids World. Aged five and seven, Lilly and Lincoln were a little old for this bright and colourful section of the park, which offered a Giggle and Hoot mini ferris wheel, a Wiggles Big Red Car ride and some fun mazes and play areas.

We found the Dreamworld Express station on the outskirts and hopped on, getting off at Dreamworld’s Corroboree. There was a plethora of Australian native animals to see, but it was the innovative virtual-reality Corroboree experience, which is housed inside a cave, that captured my daughter Lilly.

There were traditional stories brought to life in animated movies and a world of Indigenous storytelling, song and dance inside this incredible environment that gave you the feeling of going back in time.

We caught the tail end of a presentation by a young Aboriginal man talking through traditions including a smoke ceremony and demonstrating how to play the didgeridoo. The kids then met Aunty Grace, an Indigenous elder who painted their faces with white ochre, sharing the stories and meaning behind each marking as she made it on their face and arms.

Lilly was dubbed as ‘the dancer’, who would entertain through performance and then go on to teach those younger than her. Her brother was called ‘the warrior’ – he would grow up big and strong to protect his people.

The kids proudly strolled around the park with their painted faces, Lilly dancing a lot more than usual after being given permission of a kind from Aunty Grace. We found our way to the Tiger Island at the perfect time to see the tiger presentation (a complete fluke!).

There were plenty of open mouths as the keepers expertly showcased the incredible talents of the tigers and balanced it expertly with education about hunting and the effects of destruction of their habitat. Just around the corner, we got googly-eyed at the tiger nursery, watching the precious cubs napping in the sun.

Revived after resting during the show, we unleashed a bit of crazy at the Dreamworks section of the park, where Shrek, Kung Fu Panda and Madagascar characters and rides kept the kids pumped for a few hours. There were many bumper car rides and I lost count of how many times I had to lay on my belly on Gingy’s Glider and ‘fly’ around with Lincoln, but he really couldn’t get enough!

The heat of the day was taking its toll, so we switched things up a bit and headed through to Whitewater World, where the adrenaline-pumping array of slides was counterbalanced with the ease of lazing by the wave pool and watching the kids jump over the ‘swell’.

PLAYING THERE: Dreamworld is an easy day trip from the Coast and the perfect destination for a mini getaway. Doors open
at 10am. Dreamworld’s newest ride, Sky Voyager, is now open, where you can take flight over Australia’s most spectacular landscapes on the southern hemisphere’s first flying theatre. For ticket prices, visit shop.dreamworld.com.au/tickets.

STAYING THERE: The Gold Coast is known for its stunning beaches, coastal lifestyle and plethora of accommodation and restaurant options. Visit destinationgoldcoast.com to plan your getaway.