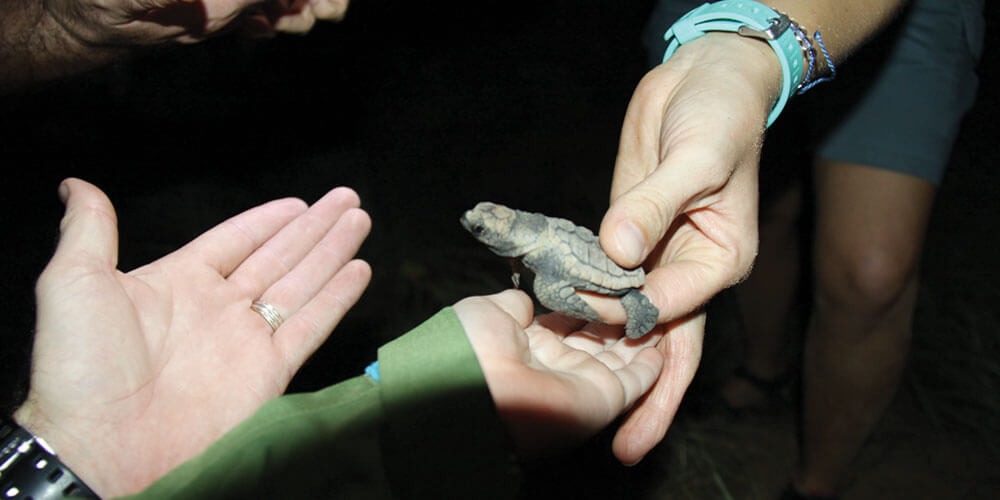 There is something universally cute about turtle hatchlings. Hundreds of people across the Sunshine Coast take action every year to clean up our beaches and clear plastic from our waterways in order to preserve the lives of these gorgeous creatures and their sea-dwelling companions.

So when I first heard there was a place in Queensland, just a few hours drive north of here, where you could go to see turtle hatchlings in their first moments of life, there was no doubt I would make it up there one day.

Mon Repos Conservation Park thrives on turtle tourism, but the Queensland Parks and Wildlife Service (QPWS) rangers are so protective of the way in which people have access to the beach in turtle nesting and hatching season that their turtle encounters from 6pm between November and March are a truly unique experience.

For our holiday, we went camping beachside in nearby Bargara – the Mon Repos Turtle Centre is a 12-minute drive away.

Traditionally, the nesting season runs from November to January and the hatchlings emerge from their nests from January to March and there is a chance you could get lucky enough to see both phenomenon unfold on your tour.

My hot tip is to book your turtle encounter as soon as you know your travel dates, as they have a first in, best dressed system and the higher the group number, the longer the potential wait for your encounter to begin.

We were allocated to group three upon arrival and were reminded that there is no set time for when we would be going onto the beach. After all, turtles are wild animals and they run on their own clock. Some nights, groups are able to depart in a rapid-fire situation and other nights there can be hours between opportunities for groups to get onto the sand.

And so our wait began. We wandered through the information centre displays and watched a movie about the work being done by the QPWS, before our youngest fell asleep on my lap in the concrete amphitheatre. He was in such a deep sleep, that when group three was called to follow rangers onto the beach at around 8.30pm, he didn’t wake up and we had to carry him while stepping cautiously onto the beach in darkness.

A few dim torch lights partially illuminated the way. We could see one of the earlier groups circled around a nest as hatchlings clamoured to the surface ready to make their journey to the ocean.

I must admit my heart sunk when I heard we would be watching a nesting loggerhead turtle as I had been so keen to see the tiny babies make their beach dash.

But when it comes to nature, you never really know what to expect. Our little one was awake by the time we reached the nest and we ended up with the best of both worlds, as the mother turtle we were watching meticulously dig a hole to lay her eggs ended up disturbing an existing nest.

With the rangers unable to interfere with the process, we watched in awe as she laid more than 100 eggs and we were allowed to take photos at strategically timed moments.

Once mama turtle made her unexpectedly quick exit down the dune and back to the ocean, the rangers were able to examine the nest to count and record the number of eggs laid and also investigate what had happened to the eggs in the older nest.

Much to our delight, some hatchlings had been preparing to emerge from the older nest and we were able to touch the shell of a newborn turtle.

That night, groups who were able to see the babies hatch formed a guard of honour stretching from the nest to the beach to watch on as they scrambled down the sand and out to sea. While we didn’t get the chance to do that, we were thoroughly enraptured with our turtle encounter and we learned so much from the rangers who were our guides for the night. It is an experience our family will cherish forever.

Mon Repos Turtle Encounters operate seven nights a week from November to late March, excluding public holidays. Mon Repos is a three-hour drive north of the Sunshine Coast. 2018/19 ticket prices are $6.65 for a child aged five to 14 years and concession, $12.80 for adults and $30.75 for a family of four. Bookings are essential, visit bundabergregion.org/turtles.