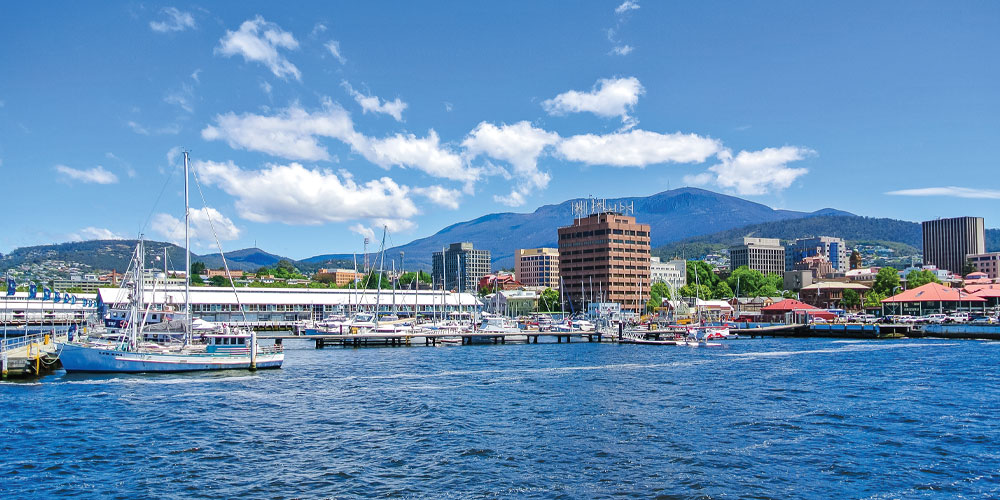 I look through my viewfinder to a crowded patchwork of gravestones leaning in all directions, with gothic, swirly words that chill me: Garden of Sleep.

This is a photo of Tasmania’s first European burial ground, marked out in 1804 in a place of seclusion and beauty away from the main settlement of Hobart.

By the 1870s the cemetery had become neglected, a depressing wilderness of weeds and toppled headstones. The decision was made to turn it into a public park.

I look up and take in the pretty, sweeping green slopes of St David’s Park. In its centre is a memorial wall made up of the original headstones, storying the existence of so many early settlers of Hobart Town.

Some tall, grand graves remain dotted throughout the park, while the grass looks bumpy, thanks to rotting tombs deep below of bodies whose families couldn’t afford to move them.

“I don’t think about that during Carols by Candlelight,” says Justin Johnstone, our Master Storyteller at MACq 01, the city’s innovative storytelling hotel that celebrates Tasmania’s past through tours like this.

“In Hobart, it takes us ages to get around to doing anything with old places, so they sit there for years untouched until someone gets around to reinventing them,” he says.

“But in many cases the history is left exposed, often treasured.”

Take Hunter Street, the emerging culinary strip on the opposite side of the cove to its more famous sibling Salamanca.

The sandstone street is dominated by Henry Jones Art Hotel, which exists in the shell of the 1830s IXL jam factory. Jones worked in the factory as a child, sticking labels on jars for 10 hours a day before he built IXL into the biggest privately owned company in Australia.

In a courtyard out the back, Justin points out the shapes of old alleyways and doorways in the hotel’s walls. “There’s all these clues to different pasts in there.”

Above our heads, pipes snake through industrial machinery and we can see where the giant smokestack once towered above the factory before a boiler explosion toppled it in 1946. Only the ghosts of furnace entrance points remain.

Outside on Hunter Street, the buildings are on a slight wonk, a clue to the district’s foundations on reclaimed land.

The street was once the centre of the town’s docklands, and the site of Tasmania’s first jetty. But it fell into neglect, soon becoming the worst slum in Hobart. The jam factory breathed new life into the area until it closed in 1979, the area lying derelict until the new millennium brought with it development. MACq 01 now edges the water, with stunning views across the modern city to Mount Wellington towering above it.

Our viewfinder shows us how Hunter Street looked in the those dirty, derelict times, and before that to 1804 – a pile of rocks on the water. No wonder the building takes a wonk.

Justin leads us through the streets of 21st century Hobart, pointing out clues to the past that reveal these windows through time.

On Macquarie Street he points out a perfectly preserved painted sign for the Bank of England, Scotland and Australia still visible between buildings before it became ANZ. We smirk at statues of King Edward VII and former governor Sir John Franklin in Franklin Square that were intended to line up perfectly; never the twain shall meet.

On the walls of Argyle Street we trace the grooves in the capping stones with our fingers. The old market once stood close to here and the butchers sharpened their knives on this wall. Further along are scrapings in the sandstone, where heels rubbed while people waited for the trolley bus in the 1950s.

A picture in our viewfinder shows men, collars up and hands clutched and folded against the cold, their feet resting back on the wall.

The tour reveals a city with a deep respect for the preservation of its past alongside an unmatched passion for the future.

Modern Hobart is an array of restaurants and markets showcasing the Apple Isle’s stunning produce, while the Museum of Old and New Art (MONA) and Dark Mofo, Australia’s most provocative winter arts festival, have given the city creative cred.

Some of the best ways to take in today’s city are by boat or by plane. Tasmanian Wild Seafood Adventures whisks us across to the peaceful bays of Bruny Island, the crew donning wetsuits and plunging deep for sea urchins, lobster and abalone before cooking up a seafood feast on the deck.

Another is from high above Sullivans Cove, where my Above and Beyond seaplane circles during a quick 20-minute jaunt.

I look down at the city. Like a walk though St David’s Park, its development has been bumpy at times. But at every turn there’s a wonderful reminder of the past that makes modern Hobart as intriguing and hotchpotch as that very first cemetery.

The writer travelled as a guest of Federal Group and Tourism Tasmania.

GETTING THERE: Fly direct to Hobart from your capital city. Hire cars are available at Hobart Airport.

STAYING THERE: The MACq 01 features 87 rooms and 27 suites, each showcasing a Tasmanian character. The hotel is dedicated to sharing stories. Visit macq01.com.au.

PLAYING THERE: MONA is 11 kilometres north of Hobart, but if you’re not up for a drive, ferries depart from the waterfront. Entry is $28 for adults, and free for under 18s and Tasmanians. Visit mona.net.au.

Above and Beyond Tasmania operates scenic flights from Franklin Wharf on Hobart’s waterfront. Visit aboveandbeyond.flights.

On Tasmanian Wild Seafood Adventures, seafood will be caught and prepared before your eyes during a comfort cruise. Visit tasmanianwildseafoodadventures.com.au.

Continue Reading
You may also like...
Related Topics: Tasmania, Travel